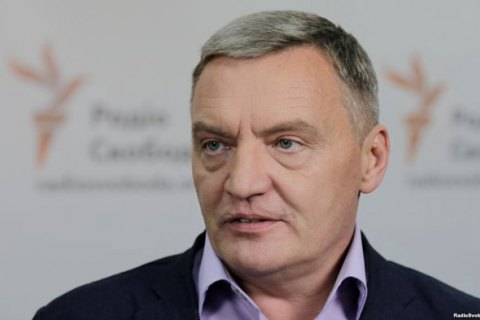 Deputy Minister for Temporarily Occupied Territories and Internally Displaced Persons Yuriy Hrymchak has been detained, his wife Yuliya has said on Facebook.

"Our house is being searched. We are asking neighbours for help," she said.

Public activist Nazar Prykhodko said on Facebook that the National Anticorruption Bureau of Ukraine (NABU) detained Hrymchak over a 500,000-dollar bribe. He specified that the bribe was accepted by Hrymchak's aide, who was also detained.

Later the NABU said that its operative acting in coordination with the Prosecutor-General's Office and the Security Service of Ukraine (SBU) exposed and detained Hrymchak and his aide "demanded from a representative of a legal entity an illegal reward of 1.1m dollars for exerting influence on the decision making by individuals empowered with government functions".

"They were caught red-handed as they were accepting 480,000 dollars out of this sum," it added.

Hrymchak was appointed a deputy minister for temporarily occupied territories and internally displaced persons in March 2017. He was a consultant to MP Yuriy Lutsenko from 2002 to 2005. From 2005 to 2006, he was a deputy head of the Donetsk regional state administration.