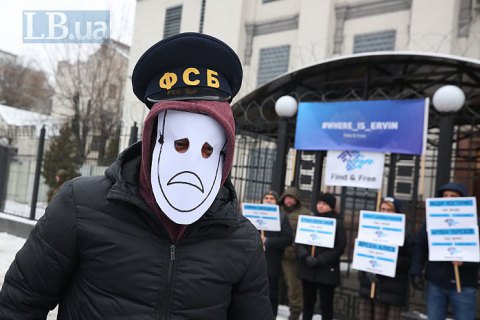 The counterintelligence of the Security Service of Ukraine (SBU) has registered gross violations of international law by Russia’s FSB officers with regard to Ukrainian nationals legally trawling fish in the Sea of Azov.

"The Russian special service illegally detains Ukrainian citizens, and then, through threats and blackmail achieves false testimony about the alleged illegal fishery," the SBU said on its website.

In particular, in 2018, representatives of the Russia’s FSB Coast Guard illegally detained two Ukrainians who were in a fishing boat in the waters of the Sea of Azov near Berdyansk.

Although there was no legal reason for their detention, the Ukrainian citizens were forcibly brought to Yeysk in Russia's Krasnodar Territory.

"Then, without the presence of lawyers, representatives of consular office or other authorized persons, representatives of Russia’s FSB conducted interrogations of illegally detained Ukrainians and demanded to sign false testimony on illegal fishery with prohibited fishing gear. In connection with the refusal of our compatriots to sign such confessions, representatives of the Russian special service fell back on threats to incriminate them sabotage and espionage activities against Russia, which stipulates imprisonment for a term of 20 years. Russia’s FSB cynically makes no secret of its methods, openly stating about repeated inspection of vessel during which weapons, explosives, drugs and so on will be found," the SBU said.

The detained citizens were forced to give false testimony and fined. Russia confiscated their motor boat and other personal belongings.

The SBU stressed that such violations by the Russian FSB have become systemic. It added that they are accompanied by information campaigns in Russia’s media, "which should undermine the image of Ukraine in international community as a state that harms the ecological fauna of the Sea of Azov, development of bioresources, support its pollution, etc."