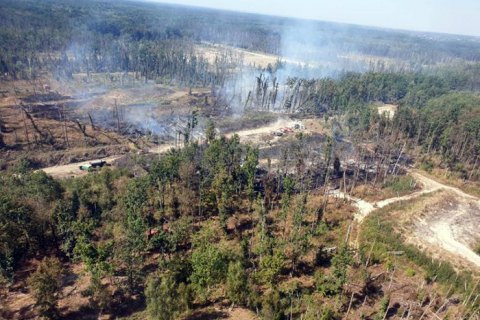 A fire broke out outside the 48th arms arsenal of the Ukrainian Defence Ministry on the outskirts of the village of Kalynivka in Vinnytsya Region at around 11.30 a.m. today.

Smoke was detected in the sector where unexploded ammunition is brought for disposal. Six explosions took place.

Investigators say around 2 ha of dry grass caught fire nearby.

There is no threat to servicemen or civilians.

The fire on the territory of the arsenal was extinguished at about 1 p.m.

On 26 September 2017, a fire at the Kalynivka arsenal caused the detonation of tank and artillery shells of 125-mm and 152-mm diameter. An arson with the use of a drone was suspected. There were 138,000 t of ammunition stored in the depot at the time. According to then Defence Minister Stepan Poltorak, 70% of them were destroyed.