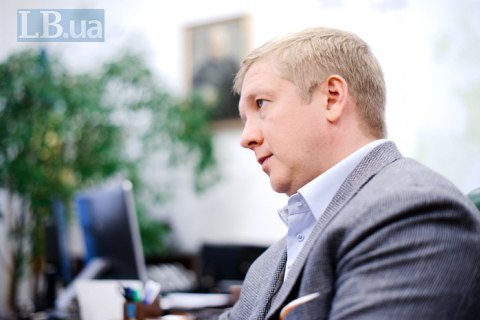 Ukraine has not yet received any official proposals from the Russian side, which would allow to start a discussion about a possible "nullification" of debts and refusal of lawsuits against Gazprom for a total of $22 billion, CEO of Naftogaz Ukrayiny Andriy Kobolyev has said.

"The Russian side offers Naftogaz to 'nullify' almost $3 billion under the Stockholm decision and abandon the lawsuit for another $12 billion. In addition, the AMC is offered to refuse a fine of $7 billion. A total of $22 billion – to 'forgive and forget'. I'm searching and do not find in mass media reciprocal steps voiced by Russia for comparable amounts. Does it really look like a 'nullification' of mutual claims?" he wrote on his Facebook page.

Kobolyev again noted that the Russian side's statement about its readiness to sell "cheap" gas to Ukraine does not correlate with Gazprom's refusal to supply it to Naftogaz in accordance with the decision of the Stockholm tribunal at the price of the German hub, despite the prepayment made by Naftogaz.

"Traditionally, Russian deliveries, even with discounts for loyalty, for some reason come out more expensive than purchases at competitive prices in Europe. This is illogical because Gazprom transports gas to a shorter distance. When the Stockholm arbitration corrected this price anomaly, Gazprom refused to supply gas. We have long been convinced that nothing costs Ukraine so much as cheap Russian gas. When our relations with Gazprom can be made purely commercial, the balance of costs changes significantly in favor of Ukraine," he said.

The official stressed that Ukraine is ready to substantively negotiate with Gazprom on the continuation of transit through its territory, while the Russian side is delaying the negotiations, constantly turning to the issue of upsetting the balance of interests by the Stockholm arbitration.