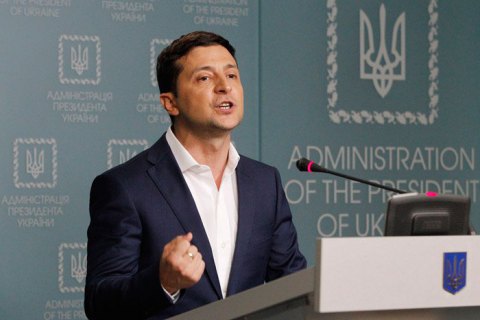 President Volodymyr Zelenskyy has said that the issue of the sale of agricultural land will be put up to an all-Ukrainian referendum.

"Soon, parliament will consider the introduction of the land market. There have been manipulations over the issue over the past 20 years. Old politicians scared ordinary people, planted a number of myths in their heads and convinced them that this should not be done. But Are you not surprised that the old politicians began to take care of the people? Or maybe it is a different story? Maybe they are lobbying someone’s interests," Zelenskyy said in a video address released on 11 November.

According to him, it was decided that between the first and second readings the draft law on the land market will be amended to say that only Ukrainian citizens and companies founded exclusively by Ukrainian citizens will have the right to sell and buy land.

"Foreigners and companies some of whose founders are foreigners will have the right to buy Ukrainian land only if the people of Ukraine give their consent to this at an all-Ukrainian referendum," Zelenskyy said.

The law on referenda has yet to be adopted by parliament.

Soon it was dropped in favour of bill No. 2178-10, which bans the sale of land to foreigners until 2024. The only exception will be made for those foreign citizens who have worked on the land for more than three years and paid taxes to the Ukrainian budget.