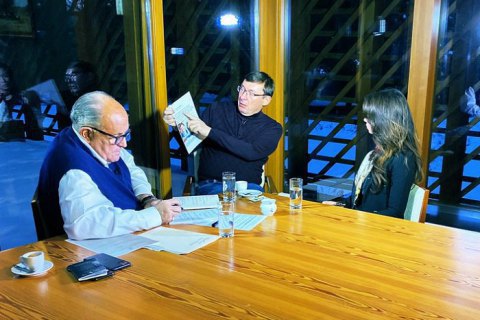 One America TV journalist Chanel Rion posted a photo of the interview on Twitter.

Lutsenko's press secretary Larysa Sarhan said that Lutsenko and Giuliani were taking part in the shooting of a documentary film.

"Yuriy Lutsenko indeed met Rudolph Giuliani to film a documentary. In a conversation with a close associate of the US president, the ex-prosecutor-general repeated the main points that he had repeatedly publicly expressed in a number of interviews for domestic and foreign media. The main one was that the US Embassy in Ukraine blocked the investigation into $7bn of the criminal ring of fugitive President Yanukovych, which were placed in an American hedge fund," Sarhan said on Facebook .

Yovanovitch took part in the public hearings in Congress contrary to the position of the White House. She testified at the closed hearings in the House of Representatives as part of the impeachment proceedings against the US president. Speaking as a witness, Yovanovitch said that Trump personally demanded her dismissal.

Yovanovitch was recalled from Kyiv in May whe Giuliani was trying to get the Ukrainian authorities to investigate former Vice President Joe Biden and his son.

The Associated Press agency, citing a former diplomat, said that Yovanovitch was removed from office after she insisted that Giuliani's requests for investigations in Ukraine should be made through official channels.