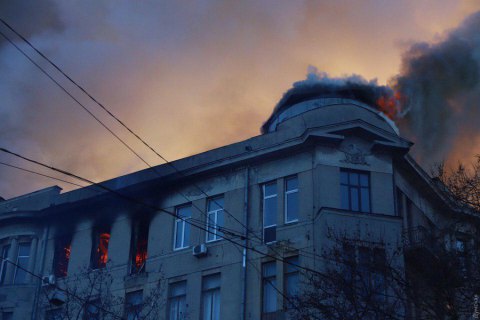 A 17-year-old student died as a result of the fire which broke out in the Odesa business, law and HoReCa college on 4 December.

According to the local news website Dumskaya, as of 7.30 p.m. there were 28 people in hospitals, including nine underage students and five firefighters.

One student and one firefighter were in a grave condition.

At least two students and three members of the accounting department are considered missing.

Also, the Institute of Marine Biology of the National Academy of Sciences of Ukraine is concerned about the whereabouts of its director Borys Oleksandrov and researcher Halyna Ivanovych, who were supposed to be in the college building at the time of the fire, Dumskaya reported later.

The college building in Odesa's Troyitska Street, also known as the Asvadurov House, was built in 1914. In addition to the college, it hosts the Institute of Marine Biology and the Odesa branch of the Institute of Archeology.