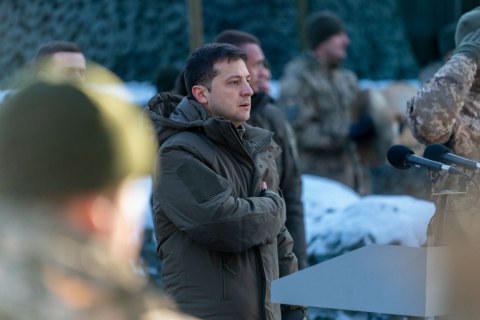 The development of a strong and capable Ukrainian army is a precondition of Ukraine's freedom and independence, and the Armed Forces have been and will be the guarantor of the effectiveness of all diplomatic efforts of the state, as stated by President Volodymyr Zelenskyy during a working trip to Donetsk region.

In his congratulations to the military personnel performing tasks in the area of the Joint Forces Operation on the Day of the Armed Forces of Ukraine, the President noted that on the eve of the meeting in the Normandy format, it was important for him to meet with the military who held the line in the east of our country everyday.

“Today, we are working around the clock to return peace to the long-suffering land of the Ukrainian Donbas. The whole world sees that Ukraine achieves this by diplomatic means. And our Armed Forces were, are and will be a guarantee of the effectiveness of all diplomatic efforts. Believe me, it is much easier to negotiate, feeling your strength and your support,” he said.

"Once again, I was convinced that our units have a high level of combat readiness for any situation," the President added.

Volodymyr Zelenskyy stressed that after the achievement of peace, no one would forget about the further development of a strong and capable Ukrainian army. “It is you and only you who are the precondition of our freedom, our independence and the development of Ukraine,” the Head of State emphasized.

The President emphasized that Ukraine should support and take care of its own army, implementing the necessary changes. In particular, it is about bringing the Armed Forces closer to NATO standards.

"We need to constantly develop, strengthen our combat capability and training. You all should feel how the state and every Ukrainian need you. We have a lot of work, a lot of difficulties, but we will surely overcome everything,” Zelenskyy promised.

In addition, during his speech, the President congratulated the military personnel on the Day of the Armed Forces of Ukraine.

"It is very important for me to be here on this day, in the area of the Joint Forces Operation, in order to thank you personally and on behalf of the whole Ukrainian people for your dedicated service, for preserving the sovereignty and independence of Ukraine," Zelenskyy noted.