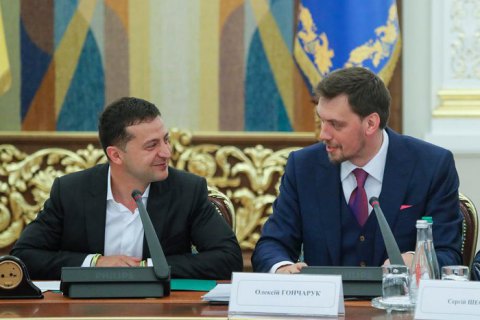 "Today I received your letter of resignation in connection with the latest conflict situations and scandals. You know how I personally feel about you and your young government. I think it will be right, I decided to give you a chance and a chance to your government, if you sort out some of the things that are important today and that worry our society," Zelenskyy said in a video published by his office.

Among these things are salaries of the Cabinet of Ministers. Honcharuk should propose a new concept of salaries for all ministers and their deputies "with an understanding of where we live". These salaries, according to the president, should be "adequate, which you can live on, in accordance with their status".

"When you and your government improve this economy, you can raise salaries," Zelenskyy said, noting that you will have to say goodbye to ministers who cannot accept their salaries.

Honcharuk’s second task is to deal with the situation at Naftogaz and the bonuses that should be paid to its top management for winning against Russia's Gazprom in court.

"They should not only be pragmatic managers, but also remain people. [They should] find a way out of this situation, suggest it," Zelenskyy said.

The third task is to find weaknesses in the Cabinet of Ministers and replace the ineffective heads of ministries.

The fourth point is to divide some ministries and develop a new approach. This concerns the Culture Ministry, the Economy Ministry and the Foreign Ministry.

The fifth question concerns the establishment of cooperation between the cabinet and Honcharuk, on one hand, and parliament and its committees, on the other hand.

Zelensky summed up his conversation with Honcharuk by saying that before the start of his job the prime minister was given a credit of trust which he had not yet exhausted.

As reported earlier, Honcharuk tendered his resignation after recordings allegedly made in his office were leaked online.

He said that the president is the paragon of openness and decency for him, therefore it is up to Zelenskyy to decide whether he should be dismissed.