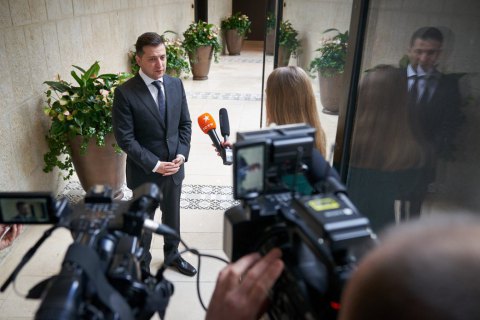 The Ukrainian delegation that arrived in Jerusalem to participate in the Fifth World Holocaust Forum has decided to pass its invitations on to people of Ukrainian origin who had survived this terrible tragedy, Ukrainian President Volodymyr Zelenskyy has said.

"We have been told that several ministers from the Israeli government have given their tickets to the survivors (of the Holocaust - ed.). They have gone through this disaster and now reside in Israel, many of them are of Ukrainian origin. I said, if we can, let's pass on our invitations," he told journalists in Jerusalem.

Zelenskyy noted that the initiative of the Ukrainian delegation had been supported by the Minister of Science, Technology and Space of Israel Ofir Akunis.

"The main thing is that we honour the memory, that we are here and can say the words of support," the president emphasized.

He recalled that one out of four Jews killed during World War II lived in Ukraine.

"For us, this is a severe loss, a historical tragedy," he said.

The Ukrainian delegation's decision to give up seats to survivors has caused criticism of the event organisers.