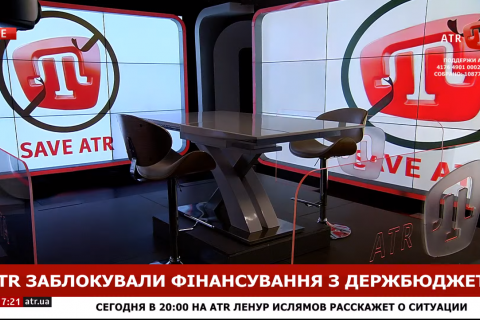 Lenur Islyamov's Crimean Tatar TV channel ATR has stopped getting money from the state budget, although 50m hryvnyas was reserved for it.

On 10 February, the TV channel started showing an empty studio with "Save ATR" showing on the background screen.

According to ATR deputy director general Ayder Muzhdabayev, the State Treasury "made a final decision today that money would be allocated to another channel".

"The Ukrainian state refused to help the only Crimean Tatar TV channel which was squeezed out of Crimea, deprived of all property, all resources," he complained.

In his words, the allocation of money was made conditional holding tenders for content production. Muzhdobayev suggested that this may jeopardize the security of its journalists discreetly working in Russia-annexed Crimea.

The channel plans to switch to emergency broadcasting. In particular, it will show the footage of Crimea's annexation and the closure of ATR. Occasionally, guests will visit an empty studio.