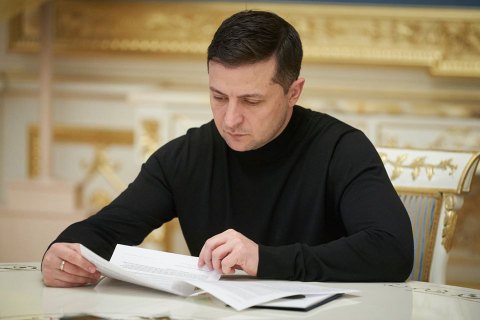 One Plus One Media Group has complained about the actions of the Security Service of Ukraine (SBU) in an open letter to President Volodymyr Zelenskyy and parliament speaker Dmytro Razumkov.

In the letter, the group asked them to pay attention to the "extraordinary and unprecedented actions of the SBU during the pre-trial investigation". On 5 February, the SBU searched the editorial office of the X-Files programme and the homes of three journalists who at different times worked for the journalist investigative department.

The authors of the letter noted that the searches of the journalists' homes were conducted in the presence of small children who were under stress.

The media group insists that the SBU's actions directly violate the right to freedom of speech provided for in Article 34 of the Constitution and jeopardize the ability of Ukrainians to receive reliable and timely information.

"Under the circumstances, unfortunately, the SBU actions are nothing else than political blackmail and a way to put pressure on media freedom. Given all of the above, we ask you not to leave the situation unnoticed, to prevent encroachments on freedom of speech in Ukraine and take measures to prevent direct political pressure and attempts to prosecute independent media," the letter concludes.

As reported earlier, a recording of a meeting at Prime Minister Oleksiy Honcharuk's office, on which voices resembling those of the prime minister, Finance Minister Oksana Markarova and National Bank of Ukraine deputy head Kateryna Rozhkova can be heard, was uploaded to a YouTube channel called "How to deceive the president".

"Zelenskyy has a very primitive, simple understanding of economic processes. He understands: there is a balance of payments, it changes a lot, and the hryvnya has strengthened significantly. It is abnormal. He’s looking for an answer to this question," said the man sounding like Honcharuk.

Soon the second part of the recording appeared online. In this clip, the three above mentioned voices can be heard in addition to those of Trade Minister Tymofiy Mylovanov and NBU deputy head Dmytro Solohub.

After the leak, the prime minister recorded a video address to ill-wishers and announced that he had tendered a letter of resignation. MPs would not be able to dismiss him because the government has one-year immunity after appointment.

Zelenskyy's office published a video of the president's meeting with Honcharuk. On the video, Zelenskyy said that he did not accept the prime minister's resignation because "the credit of trust has not yet been exhausted".

On 31 January, some media reported that Zelenskyy had known about the leaked recordings as soon as the next morning after their publication. The recording itself was allegedly edited on the computer of an investigative journalist.

On the evening of 5 February, SBU employees searched the building at 18 Kurenivska Street where the office of One Plus One TV is located.

The metadata of the leaked recording was found to mention One Plus One journalist Yevhen Kuksin whose place searched by SBU officers on 5 January.

The file was uploaded to Telegram by MP Oleksandr Dubinskyy.