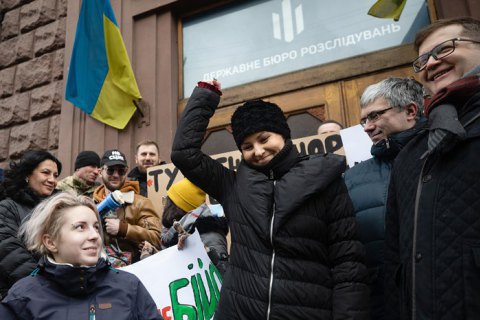 Kyiv's Pecherskyy district court has released European Solidarity MP Sofiya Fedyna on her own recognizance, according to Ukrainian News.

Thus the court upheld the prosecution’s request for a measure of restraint.

She cannot leave Kyiv and Kyiv Region without permission and must report to court or investigators when summoned. However, the court turned down other motions and she can travel abroad.

Fedyna’s lawyer insisted in court that she cannot hand in her passport because she is a people's deputy, and if she did, she would not be able to represent Ukraine in other countries.

“I am a volunteer. My fellow MPs have repeatedly told me that now I am a politician and I should speak not as a volunteer, but as a politician. As long as there is a war in my state, while my defenders get killed, I remain, first of all, a volunteer. I will say everything which, in my opinion, can help protect the military. I believe that each of us owes to each serviceman," Fedyna said.

On 26 October, Fedyna and volunteer Marusya Zvirobiy recorded a video in which they discussed how Ukrainian President Volodymyr Zelenskyy could get killed in Donbas, where he went on a visit.

Both are now suspected of making death threats to the president under Article 346 Part 1 of the Criminal Code.

In February, a court ordered Zvirobiy to wear an electronic bracelet and placed her under her own recognizance for two months.