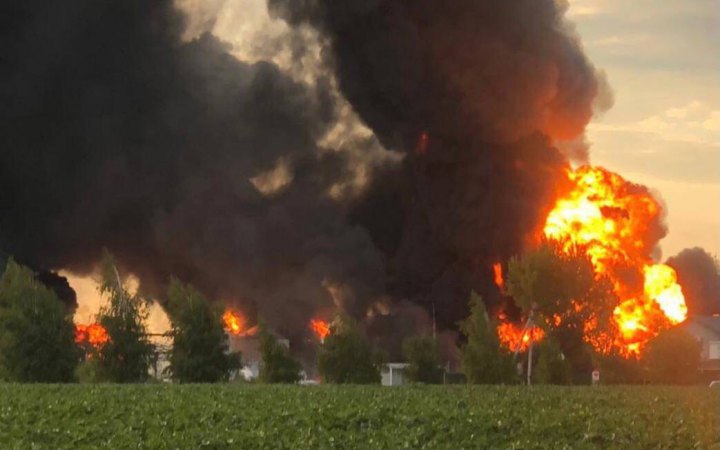 The General Staff of the Armed Forces of Ukraine reports that Ukrainian defenders inflicted significant losses on the russians in the area of Slovyansk near Krasnopillya when the occupiers tried to conduct reconnaissance in combat.

In the Severodonetsk direction, they managed to repel an enemy assault in the direction of Sirotyn. The occupiers also tried to carry out assault operations to establish complete control over Severodonetsk but were unsuccessful. About the situation in other areas as of June 18 - in our news.

There is destruction and casualties.

In the Izium district of the Kharkiv region, Russia fired missiles at a gas processing plant.

"According to preliminary data, the russians launched several missiles. Private houses were also damaged," said Oleg Sinegubov, head of the Kharkiv Regional Military Administration. As a result of the shelling, a large fire broke out.

According to the head of the Dnipropetrovsk regional council, Mykola Lukashuk, and the head of the Regional Military Administration, Valentyn Reznichenko, three missiles destroyed an oil depot in the Novomoskovsk district. Three people were hospitalized with burns.

It later became known that the number of victims of the occupiers' missile attack had risen to 11, one of whom was in critical condition.

The head of the Luhansk Regional Military Administration, Serhiy Gaidai, stressed that russia had drawn all its reserves to the Luhansk region and that large enemy attacks were to be expected in the coming days.

"The russians have thrown all their reserves in the Severodonetsk and Bakhmut directions. They are trying to establish full control over the regional center and cut off the Lysychansk-Bakhmut route ... The situation in the satellite villages of Severodonetsk is difficult. There was heavy fighting in Metiolkine. We are waiting for the events of the night," said Gaidai.

In the Donetsk region, the soldiers of the 72nd Mechanized Brigade named after the Black Cossacks shot down a russian Su-25 aircraft from the Igla MANPADS.

"… He crashed loudly and brightly. Because in the skillful hands even an Igla MANPAD is a good tool," wrote the brigade in a Facebook statement.

The pilot of the downed Su-25 plane managed to eject and was taken prisoner.

"And here we have the pilot. Live trophy of the 72th Black Cossacs Mechanized Brigade… The man is alive, has injuries due to "soft" landing. He is in the reliable and caring hands of the Armed Forces," wrote the Brigade on the Telegram channel.

Soldiers of the 81st Separate Airmobile Brigade of the Assault Troops blew up a tank and two infantry fighting vehicles.

High-precision shots were made from a British field trailer 155 mm caliber howitzer.

"Irreversible military and operational casualties of the russian armed forces - 37,592 people. This figure excludes data on the loss of russian private military companies involved in hostilities in Ukraine. As of Friday, June 17, their losses amount to 9,457 dead," wrote Avakov on the Telegram.

According to the General Staff, about 200 russian servicemen, nine tanks, one plane and ten armored vehicles were liquidated on the previous night.

The Coordination Headquarters for the Treatment of Prisoners of War held another exchange on a 5-by-5 basis, according to the Main Intelligence Directorate of the Ministry of Defense of Ukraine.

"Four civilians were taken prisoner by the occupiers during the fighting in the Kyiv region. Three of them were captured during the occupation of Gostomel. The body of one of the dead defenders of Ukraine was also returned," the MID said.

Secretary of the National Security and Defense Council, Oleksiy Danilov, said that the U.S. lend-lease program that is supposed to simplify military aid to Ukraine in the face of the threat of russian invasion has not yet taken effect.

He added that the lend-lease might begin in July-September because of many factors to consider.

Danilov also criticized the leader of the Servant of the People parliament faction, David Arahamiya, who said that Ukraine lost an average of 200-300 soldiers per day; sometimes, the number of killed and wounded could reach 1,000 per day. According to the Secretary of the Security Council (Danilov), one should not manipulate data on losses but be responsible for one's words.

President Volodymyr Zelenskyy visited the positions of the Ukrainian military in the Mykolayiv region and presented awards to the soldiers.

A council on the state of the economy, water supply restoration and agriculture situation took place in Mykolaiv.

During the meeting with the authorities of the region, he discussed how to organize a corridor for the export of agro-industrial products from the ports of the Odesa region. According to the head of the Odesa Regional Military Administration, Maxim Marchenko, 39 civilian ships under 14 flags were stalled in the region's ports due to the russian aggression.

The Prime Minister of the United Kingdom Boris Johnson said on June 18, that Ukraine can and should host Eurovision 2023.

The organizers of the music competition had stated that they wanted to hold the event in Britain because of the large-scale war that russia started in Ukraine.

Rescuers have identified beaches in Odesa where vacationers can swim.

"The State Emergency Service has identified areas where it will be safe to swim in the sea. But in most parts of Odesa today, it is dangerous," said Interior Minister Denis Monastyrsky.