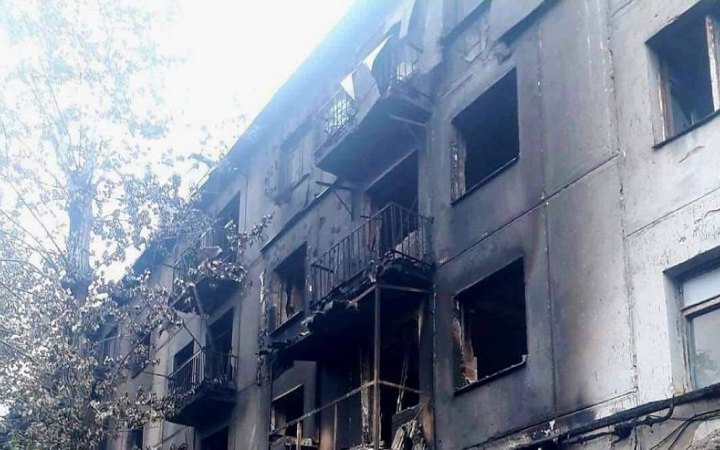 Consequences of shelling in the Luhansk region
Photo: Serhiy Gaidai in Telegram

This is the 116th day of the resistance to the russian military invasion. In the Volyn and Polissya areas, specific units of the Armed Forces of Belarus continue to cover the Belarusian-Ukrainian border in the Brest and Gomel regions. The threat of missile and air strikes from the territory of Belarus continues.

This is stated in the morning report of the General Staff of the Armed Forces of Ukraine.

In the Siversk direction, the enemy deploys the units of the Western Military District to restrain the actions of the Ukrainian Defense Forces in the border areas of the Bryansk and Kursk regions. The enemy continues to improve the engineering equipment of the positions and conduct air reconnaissance.

In the Kharkiv direction, the enemy's primary efforts are focused on maintaining the occupied frontline and shelling the positions of our troops. They launched air strikes on the settlements of Tymofiyivka and Tsapivka. The supply of weapons, military equipment and material resources from the territory of the russian federation continues.

Not far from Rubizhne, the enemy tried unsuccessfully to conduct surveillance and conducted remote mining of the area near the village of Cherkasy Tyshky.

In the Slovyansk direction, the enemy fired on the positions of our units near Dibrivny, Vernopil, Kurulka, Bohorodychny and Dolyna.

The enemy did not take active action in the Lyman direction. They fired at our units in Donetske and Mykolayivka and launched an air strike near Pryshyb and a missile strike in the village of Mayaki.

In the Severodonetsk direction, the occupiers are shelling the settlements of Lysychansk, Borivske, Bila Hora and Ustynivka. Air strikes were carried out near Bila Gora, Myrna Dolyna and a missile attack near Verkhnyokamyanka. To correct the fire in the area of Severodonetsk, the enemy conducts round-the-clock air reconnaissance using UAVs Orlan-10. Fighting continues for control of the city.

Our units repulsed the assault in the area of Toshkivka. The enemy has retreated and is regrouping.

In the Bakhmut direction, the occupiers are firing on our troops' positions in the settlements of Mykolaivka, Belogorivka, Yakovlivka and Pokrovske. Missile strikes were recorded near Zaitseve and New York. The enemy is storming in the direction of Orikhove - Girske, fighting continues.

Our defenders successfully repelled the assault in the directions of Orikhove - Zolote and Pervomaisk - Zolote. The invaders are using assault units to conduct surveillance in the direction of Nyrkove - Mykolaivka to expose the fire positions of our defense forces; the fighting continues. Our soldiers stopped an attempt to advance in the direction of Vrubivka - Mykolayivka with accurate fire. The enemy retreated.

The enemy did not take active action in the Avdiivka, Kurakhiv, Novopavliv and Zaporizhzhya areas. They fired missiles at the settlements of Myrolyubivka and Hrodivka.

In the South Bug direction, the occupiers focus on maintaining their current positions.

In the Mykolayiv direction, the enemy fired on the units of the Defense Forces with barrel and jet artillery near the settlements of Pravdyne, Posad-Pokrovske and Blagodatne. They conducted air reconnaissance of our troops' positions, using UAVs around Tavriyske.

In the Kryvyi Rih direction, the enemy fired artillery and rocket-propelled grenade launchers into the areas of Chervonyi Yar and Kobzartsi.

"Ukrainian defenders inflict losses on the enemy in all areas where active hostilities continue. The russian occupiers continue to spread misinformation about the alleged location of our military units in schools, hospitals and churches to justify somehow the destruction of civilian objects on the territory of Ukraine. We ask to trust only verified sources and not to spread russian fakes and misinformation," the General Staff said.