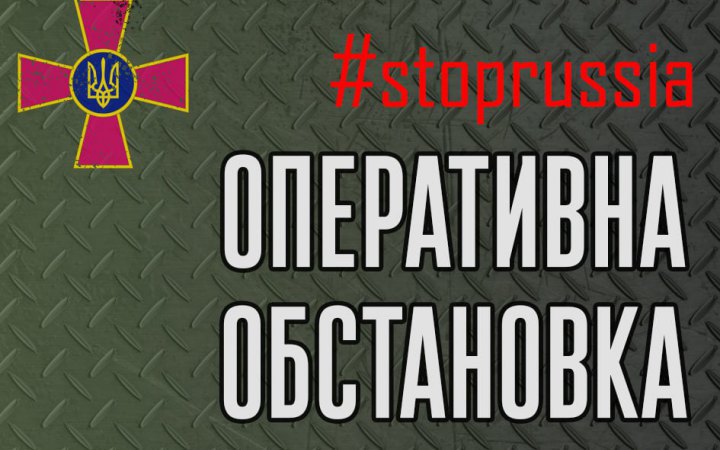 Ukraine's defence forces inflict losses on the enemy in all directions, the Ukrainian Armed Forces' General Staff said in its 6 pm update. Therefore, the invaders are trying in any way to avoid hostilities. Due to the refusal to return to the territory of Ukraine a significant part of the occupiers, who were taken away to restore combat capability, the command of some units banned any leave for personnel.

In the Volyn and Polissya areas, on the territory of the republic of belarus, the preparation of sabotage and reconnaissance groups by separate units of the armed forces of the russian federation for their further actions on the territory of Ukraine is noted.

In the Siversky direction, in order to mark their presence and restrain the Defence Forces, the enemy holds separate units of the Western Military District in the border areas of Bryansk and Kursk regions. It fired on civilian and military infrastructure near Khrinivka and Yanzhulivka.

In the Kharkiv direction, the enemy fired from tanks and artillery of various calibers at the settlements of Ruski Tyshky, Chepil, Chuhuyiv, Zolochiv, and Mospanove. It carried out air strikes near Yavirske, Dementiyivka and Zamulivka. It tried to improve the tactical situation in the area of the Dementiyivka settlement by assault, but was unsuccessful.

In the Donetsk direction, the enemy, with the support of artillery, tries to block the city of Lysychansk from the southern direction. It fired on civilian and military infrastructure in the Lysychansk, Verkhnyokamyanka and Loskutivka districts. It struck an air strike near Vovchoyarivka. To support the offensive, the enemy strengthened the artillery group.

In the Kramatorsk direction, the occupiers did not fight actively, fired artillery at the area of the settlement of Mayaky.

In the Bakhmut direction, the enemy fired mortars, barrel and jet artillery at our positions near Mykolayivka, Berestove, Pokrovske, Kodema, and New York.

Ukrainian soldiers inflicted heavy losses on the enemy near the village of Pavlivka. After an unsuccessful assault, the occupiers withdrew.

In the Avdiyivka, Kurakhove and Zaporizhzhya directions, the enemy fired at the positions of our troops with barrel and jet artillery in the areas of the settlements of Vodyane, Pisky, Maryinka, Prechystivka, Hulyaypole and Bilohirya. It fired missile and artillery strikes at the civilian infrastructure of settlements in the rear areas of the defence forces.

In the South Buh area, the occupiers fired on civilian infrastructure from barrel and jet artillery in the areas of Osokorivka, Trudolyubivka, Dobryanka, Hannivka, Zorya, Blahodatne and Luch. It struck missile strikes on the infrastructure of the city of Mykolayiv.

With the support of army aircraft, the enemy tried to regain control of the settlement of Potemkin, was unsuccessful, withdrew.

The blockade of the north-western part of the Black Sea continues.

In the temporarily occupied territories, the occupying authorities continue to carry out so-called "filtration" measures against local residents. Counterintelligence measures have been intensified at checkpoints.