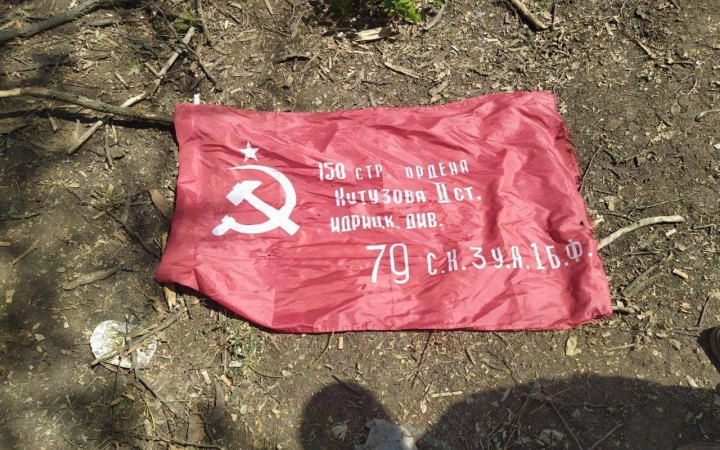 Servicemen of the 128th Detached Transcarpathian Mountain Assault Brigade have knocked the russians out of their positions in the southeast direction and took their battle flag as a trophy.

The brigade said on Facebook that as a result of an engagement with russia's 150th Motorized Rifle Division, the russians abandoned their positions in panic. They left behind ammunition and food, as well as an exact copy of the victory flag erected by the Red Army over the Reichstag in Berlin on 1 May 1945.

The flag carries an abbreviation of the 150th Idritskaya Rifle Division of the Order of Kutuzov II Degree,the 79th Rifle Corps, the 3rd Strike Army, the 1st Belarusian Front.

"This flag is often used by the successor of the Red Army's Soviet division - the 150th Idritskaya-Berlinskaya Rifle Division of the Order of Kutuzov, which belongs to the Southern Military District of the russian army and is stationed in Rostov Region. In the summer 2018, the division got an honorary name, Idritskaya-Berlinskaya," the brigade said.

It noted that the honorary titles "did not help the Idritskaya-Berlinskaya division, its soldiers were running away from 128th Brigade Stormtroopers so fast they even abandoned their flag".