Thanks to the work of the renowned researcher Jomini of the West, we have a map that allows us to understand the course of events retrospectively. 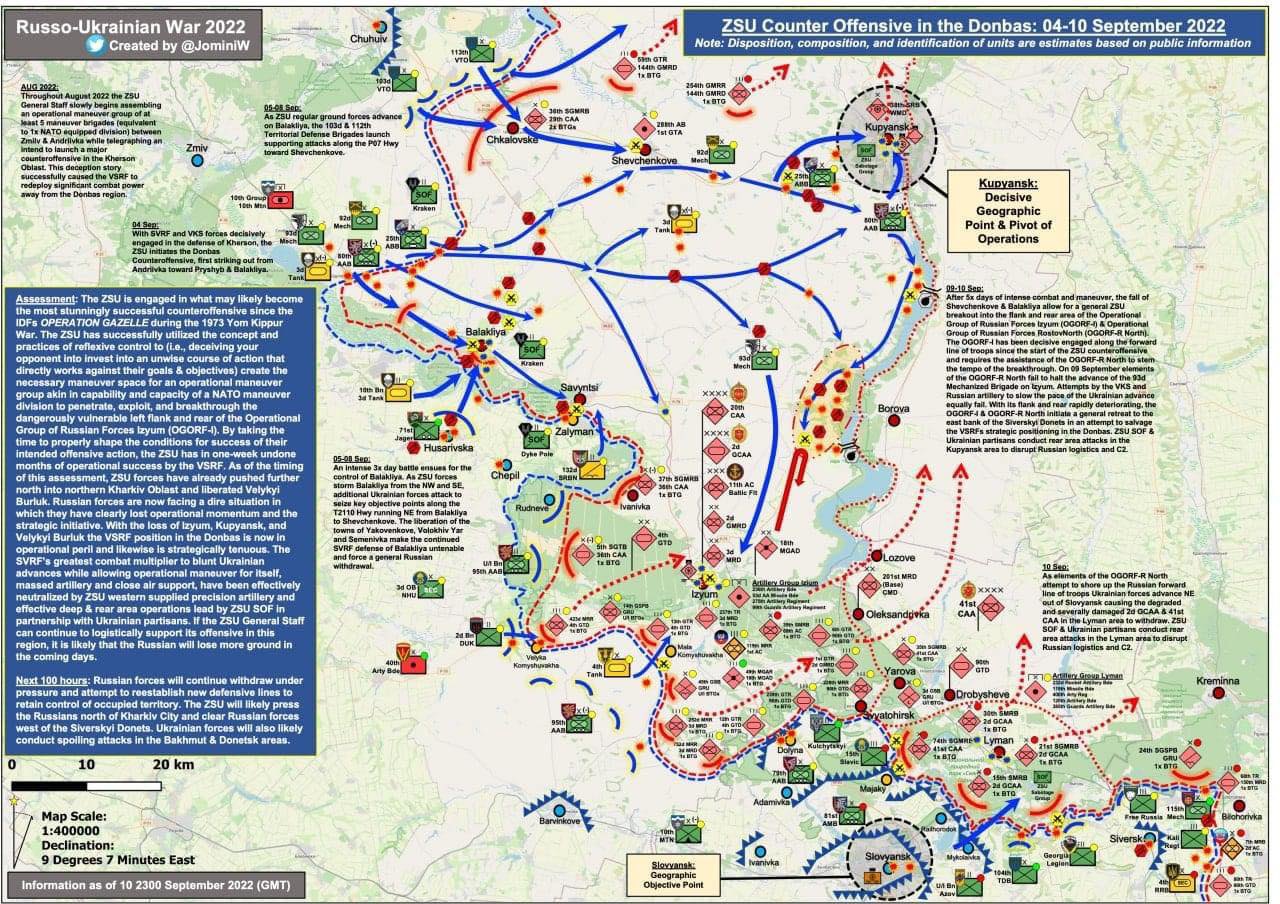 On 5 September, the 80th Detached Air Assault Brigade started an offensive on Balakliya, breaking through the enemy defences. From the south, the 71st Jaeger Brigade came to meet them from Husarivka, supported by a tank battalion of the 3rd Tank Brigade. The Russian garrison in Balakliya was in danger of being surrounded from three sides. The Kraken detachment of the Ukrainian Defence Ministry's Main Intelligence Directorate made a sudden appearance from the fourth side, closing the trap. Let's say, not everyone escaped from Balakliya...

The very same day the 103rd and 113th territorial defence brigades operating from Chuhuyiv along road R07 attacked positions of two Russian BTGr of the 30th Detached Motorised Rifle Brigade of the 29th Combines Arms Army that were defending Chkalovske. Parts of the 113th Detached Territorial Defence Brigade suddenly turned to the northeast, threatening to encircle the BTGr of the 59th Tank Regiment of the 144th Motorised Rifle Division on the right flank. The strike in the directions converging near Chkalovske led to a breach in the tactical line of defence: yesterday's taxi drivers-programmers-farmers from territorial defence brigades swiftly advanced to Shevchenkove, where they surprised the firing positions of the 281st Artillery Brigade of the 1st Tank Army, leading to the destruction of the fire support system in the whole direction. 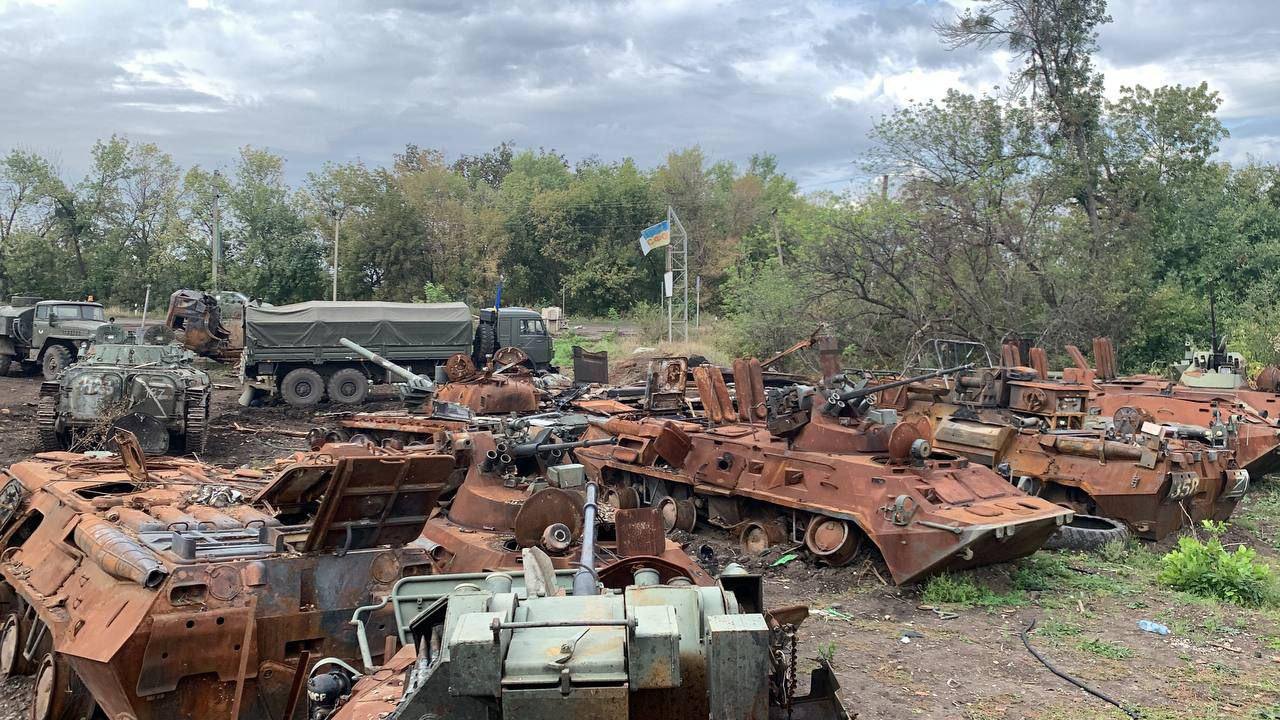 
The 25th Detached Airborne Brigade and the 92nd Detached Mechanised Brigade suddenly went on a raid between Chkalovske and Balakliya. The latter unexpectedly returned to the northeast, to Shevchenkove, which it approached from south without encountering much resistance. The 25th Detached Airborne Brigade, acting as a classic raiding unit, rushed to Kupyansk. The 93rd Detached Mechanised Brigade followed immediately after it, disappearing in the dust of the first one and misleading the enemy about the real number of troops that had rushed into the raid.

Creating tension along the front line near Zalyman, the 132nd Air Assault Reconnaissance Battalion entered the rear of the Russian garrison - it was locked from the front by the Special Forces Operation unit Dyke Pole Towards them, maintaining a high tempo of the offensive, a battalion of the 80th Detached Air Assault Brigade broke through.

During the first 24 hours the enemy was forced to fight for Chkalovske, Balakliya and Zalyman. In the intervals, when the enemy was busy with operational formation, either one or more brigades were moving somewhere along the route with unclear tasks, which provoked a managerial crisis in the enemy's HQ: where to throw the reserves, where to concentrate the support and logistics efforts? 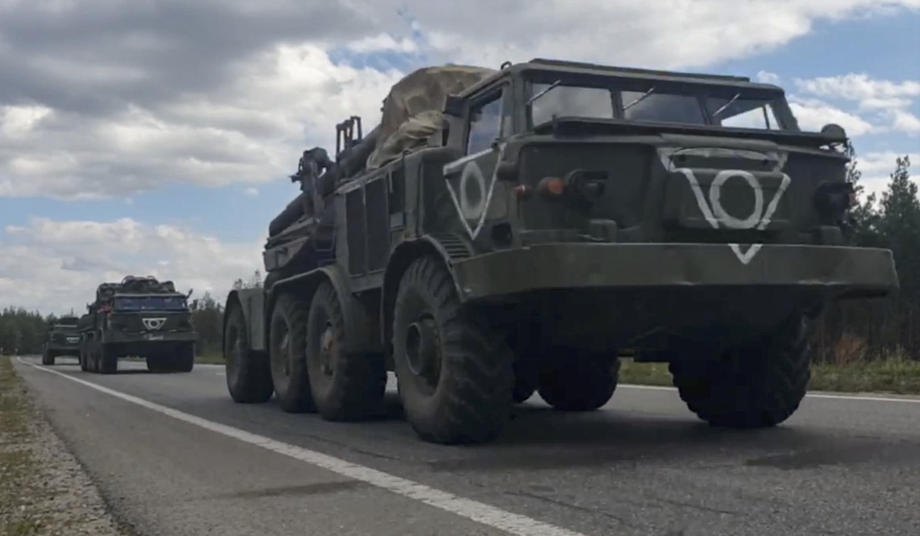 Photo: EPA/UPG
Occupiers on the move in Kharkiv Region, 9 September 2022


At the same time, the 2nd Battalion of the Volunteer Ukrainian Corps attacked a battalion of the 421st Motorised Rifle Regiment of the 4th Tank Division of the Muscovites in the area of Velyka Komyshuvakha, while the 4th Tank Brigade hit to the west of Mala Komyshuvakha, at the junction between the fighting lines of 13th Tank Regiment and the 45the Detached Special Purpose Brigade of the Russian Airborne Troops.

In a few days, the 25the Detached Airbrone Brigade and the 80th Detached Air Assault Brigade suddenly appeared near Kupyansk, leading to a panic escape from the town by a logistics battalion of the 38th Detached Motorised Rifle Brigade of the Russian Armed Forces. Somehow, all of a sudden, reconnaissance and saboteur groups of the Ukrainian Armed Forces' Special Operations Forces appeared near the city, which upset the enemy's plans for good. In a word, not everyone managed to evacuate from the rear of the 38th Detached Motorised Rifle Brigade... Meanwhile, the 25th and 80th brigades were entrenched on the western bank of the River Oskol.

The 2nd Battalion of the Ukrainian Volunteer Corps knocked out units of the 423rd Motorised Rifle Regiment of the 4th Tank Division, which began their retreat towards Izyum. This is where the Kholodnyy Yar [brigade's] mechanised battalions arrived from the north to Izyum. 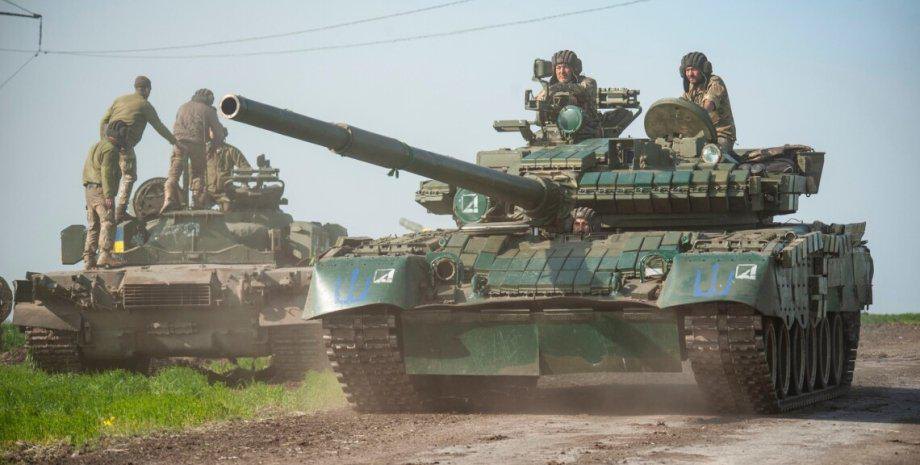 In the area of the Svyati Hory National Park, Ukrainian Armed Forces units moved into action along the line Svyatohirsk-Mayaky-Rayhorodok-Mykolayivka-Siversk. The 15th and 74th detached motorised rifle brigades of the Russian Armed Forces, holding positions at this line, began to withdraw to Lyman, but did not stop there and, maintaining a high rate of escape, moved either to Drobysheve or to Kreminna. 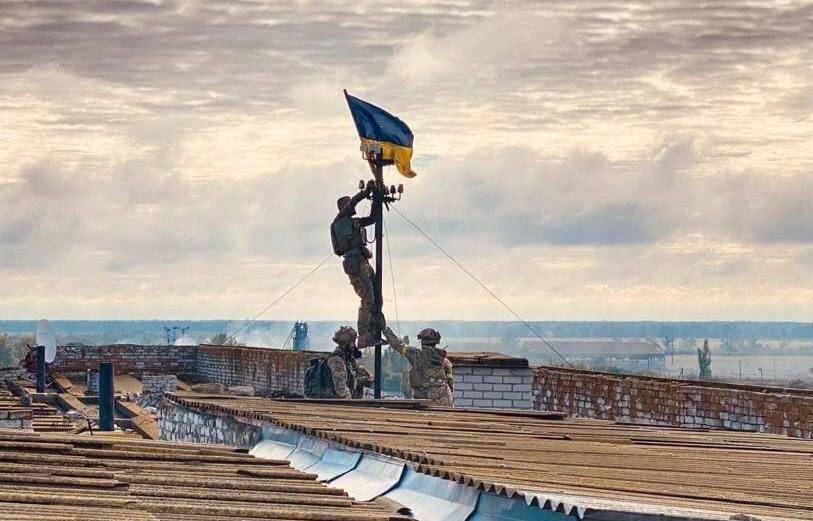 This beautiful operation has not yet been completed, but it is already clear that:

- Ukraine's Armed Forces have access to satellite intelligence from allies and a near real-time picture of the operational area, allowing them to choose the best routes and lines to pursue;

- The raids by our brigades, carried out at high tempo in considerable depth, allowed almost without a pause to develop tactical success into operational success and destroy the operational structure of the enemy in Slobozhanshchyna;

- Hiding one brigade in the combat formations of another, misleading the enemy about the real number of forces involved and the directions of their actions made it possible to achieve surprise action in selected areas of the battle space of Slobozhanshchyna;

- The bold and unexpected manoeuvre with the directions of action by Ukrainian Armed Forces units rocked the enemy defences: the enemy was unable to concentrate forces to counter a breakthrough through the sheer uncertainty about what main course of action our military would take;

- The use of Special Operations Forces units allowed for the disruption of the Russian group's tactical and partly operational rear;

- The information campaign of the last month prompted the enemy to refocus on the Kherson direction and concentrate there the available operational reserves and considerable material resources, which enabled Ukrainian troops to practically liberate Kharkiv Region during three up to the line on the west bank of the Oskol River. 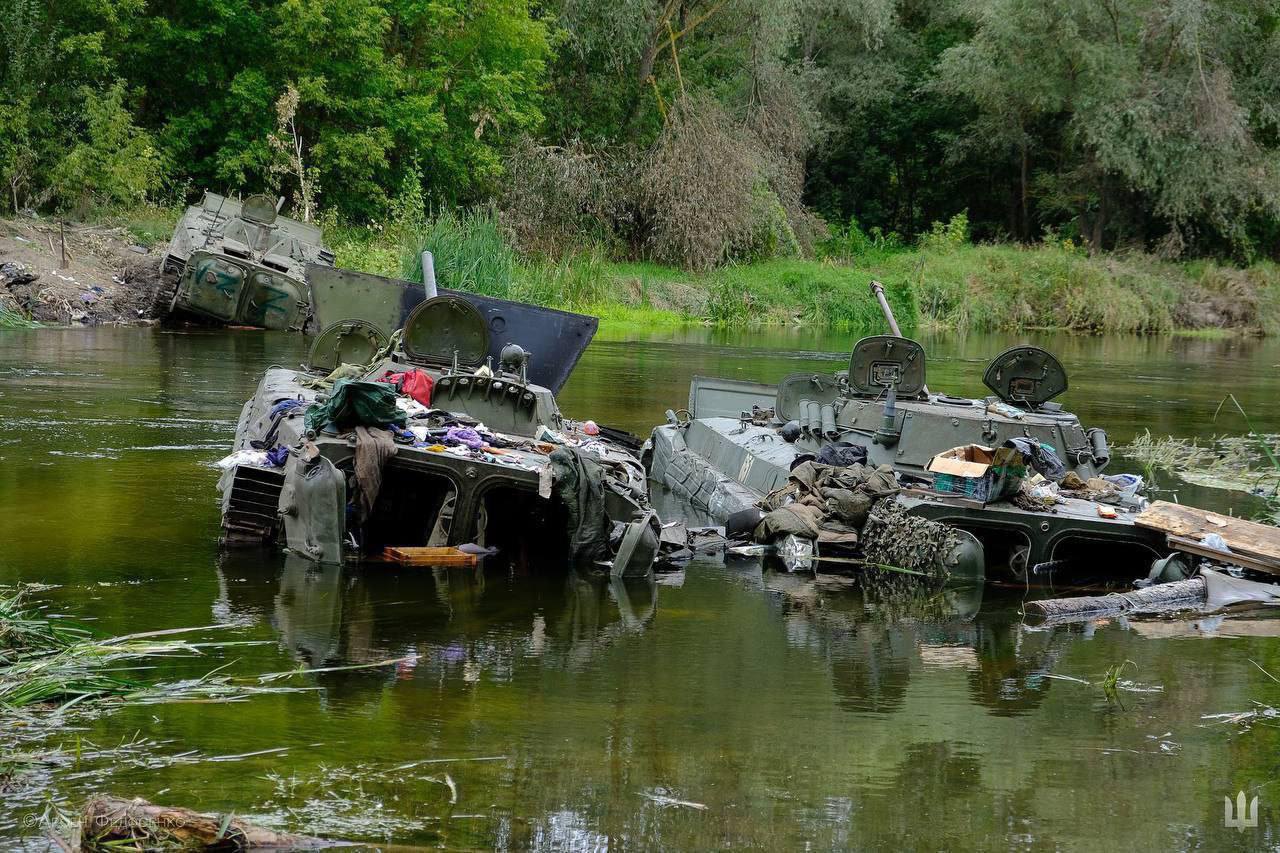 - Mechanised and airborne brigades of the Armed Forces of Ukraine are trained for resolute raids, which require initiative from commanders of the tactical level, proper technical condition of combat vehicles, top skills from mechanics-drivers, an ability to shoot on the move from gunners-operators;

- The young territorial defence units have demonstrated outstanding military skills, individual mastery of weapons, and the ability to take creative and proactive action on the battlefield, even without the proper military education of the tactical-level commanders;

- The professional sergeant corps is establishing itself as a military leader capable of rallying and leading the ranks;

- The Ukrainian school of raids can be seen as the leading one at least in Europe. (I could be wrong, but I can guess the style of Gen Viktor Muzhenko or his students and followers).

In contrast to our enemy, which during 200 days of war has not once surprised us with operational innovations, the Ukrainian staffs added to the collection of military art a brilliant example of modern reading of the offensive operation of the operational grouping of forces, based on a deep raid by mechanised brigades. 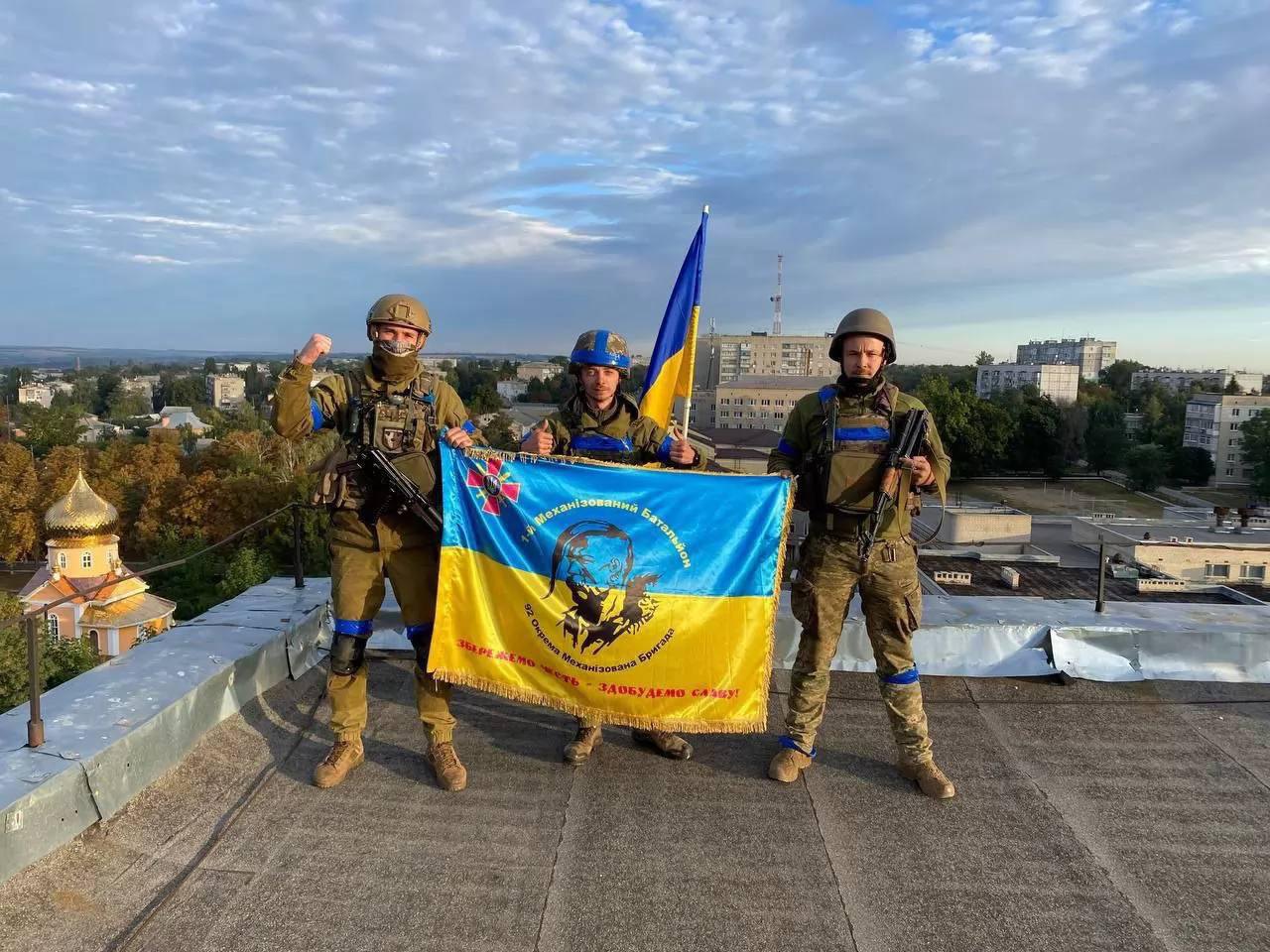