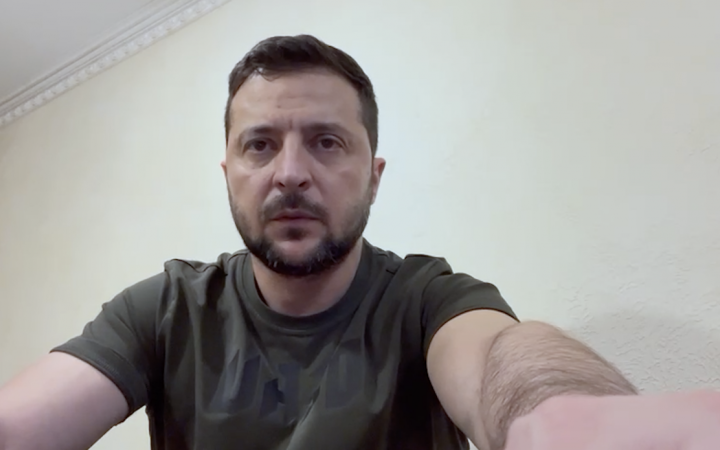 Investigative actions are ongoing in the areas of Kharkiv Region that have been liberated from the Russian occupation.

"All the crimes of the Ruscists are being recorded, evidence of their guilt is being collected," President Volodymyr Zelenskyy said in his daily evening video address.

The following is the text of Zelenskyy's speech published on his official website:

"Torture chambers where civilians of occupied cities and towns were abused, premises where people were kept – even foreigners – were found. In particular, seven citizens of the Republic of Sri Lanka, students of the Kupyansk Medical College. Back in March, they were captured by Russian soldiers and subsequently kept these people in the basement. Only now, after the liberation of Kharkiv region, these people were saved, they are provided with proper medical care.

Exhumation of bodies continues at a mass burial site near Izyum. As of now, more than 440 graves have been found. It is too early to say about the number of people buried there, investigations are ongoing.

There is already clear evidence of torture, humiliating treatment of people... Moreover, there is evidence that Russian soldiers, whose positions were not far from this place, shot at the buried just for fun.

The world must react to all this. Russia has repeated in Izyum what it did in Bucha. And now we have just begun to learn the full truth about what was happening in Kharkiv region at that time.

It is good that the UN units are already preparing a group of employees who will visit this place near Izyum, who will see and be able to report to everyone in the UN system about what the Russian terrorists did.

We will ensure full access of journalists to the liberated territory and all places of human abuse. We will provide access to tell the world that ruscism must be condemned.

I thank all our partners, all leaders and just our ordinary people who help fight for justice. Fight for the official recognition of Russia as a state sponsor of terrorism, for the strengthening of sanctions against Russia for this terror.

I held a meeting of the Supreme Commander-in-Chief Headquarters today. As always, key leaders of the defense and security sector, key representatives of the central government, who ensure the implementation of the defense plan, attended it. Commanders of operative forces reported on the situation on the front line. In addition to completely understandable issues and solutions, the topic of advanced weapons, which will significantly strengthen our army, was also touched upon.

I spoke today with the President of Finland. I thanked him for the support we have already received and outlined the additional needs we have. An important topic of conversation was the European policy regarding visas for citizens of the terrorist state. I believe that for every country that shares a common border with Russia, the visa issue is vital and should be resolved in favor of a complete restriction of access for Russian citizens.

I also spoke today with representatives of the Nike company. I thanked them for the decision to leave the Russian market. The right decision. This is an example of how business can play a significant role in protecting humanity and freedom. If a state chooses the path of terror, it is the duty of every self-respecting company to distance itself from such a state.

Today, a meeting of the group led by Andriy Yermak working on Ukraine's accession to the Organisation for Economic Co-operation and Development took place in the Office, a meeting with the G7 ambassadors and other partner states. This is an extremely important direction, which is important both in the context of European integration and in the context of the internal transformation of our state. During the meeting, the diplomats were given the details of our initiative to create an ad hoc international tribunal to punish Russia for the crime of aggression against Ukraine. I'm thankful to the G7 representatives and other partner countries for their willingness to support Ukraine!

And one more thing. This Saturday we celebrate Rescuer's Day – a professional holiday of those who dedicated their lives to saving others. And it is also the day of those who, under certain circumstances and thanks to their decency and courage, became a rescuer by helping someone else. Today, I honored such people with state awards. And, of course, tomorrow in the evening address I will say more about it. But I want right now, without waiting for tomorrow evening, to congratulate everyone who performs this noble work, who saves people. I want to thank you for the thousands of saved lives, for the security you are returning to us, all Ukrainians.

Eternal glory to all who care about people! Please always help each other, always keep unity in everything. We must stick together, all Ukrainians, and that's how we will win."