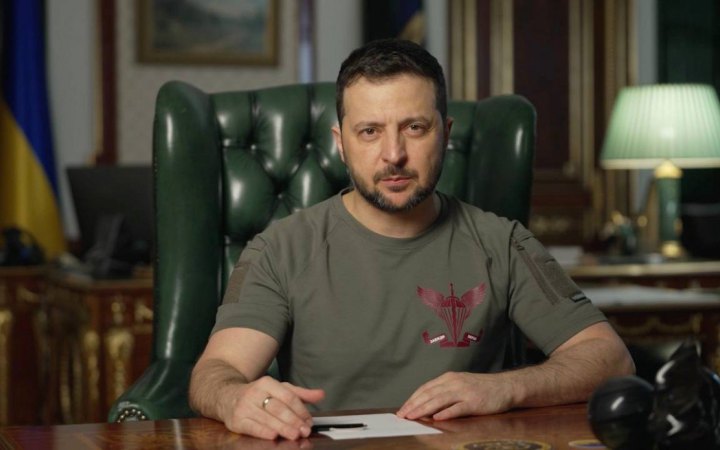 He also thanked power engineers who continue to stabilize the energy grid damaged by Russian strikes.

The following is the text of his speech published on the presidential website:

Good health to you, fellow Ukrainians!

First of all, it should be said that today is the professional holiday of our paratroopers - the Day of Airborne Assault Troops of the Armed Forces of Ukraine.

I'm in a relevant gift. The boys handed it over and asked to wear it. It’s my pleasure!

This is the day of units of the 132nd Іeparate Reconnaissance Battalion, which took part in the liberation of the Zhytomyr region and Kyiv region together with other units of the Airborne Assault Troops.

The day of the warriors of the 148th Separate Artillery Division who every day accurately "subtract" the enemy in the most threatening areas of the front.

This is the day of the 71st Separate Hunting Brigade, which became part of the Airborne Assault Troops recently, but has already proven itself well.

I thank you all, warriors! Thank you to all Ukrainian paratroopers!

In the morning, in the White Hall of the Heroes of Ukraine in the Mariyinsky Palace, I had the honor of presenting awards on the occasion of the professional holiday to the best fighters. I handed over the Gold Star Orders to the relatives of our Heroes who gave their lives for Ukraine.

Our Airborne Assault Troops, like all the Defense Forces of Ukraine, pay an extremely high price for our people to preserve their freedom. Thousands of Ukrainian men and women died fighting for our country. We should always remember them. We must always honor their courage and self-sacrifice.

I spoke today about Ukraine's contribution to the protection of freedom and European values in an address to the NATO Parliamentary Assembly.

I called on the countries of the Alliance to take specific actions to implement the Ukrainian Peace Formula, which can reliably guarantee peace and justice for Ukraine and the entire Euro-Atlantic community.

I also called on all parliaments of NATO member states to finally adopt a decision on designating Russia as a terrorist state. I believe that gradually we will reach this result - this is how Russia will be perceived in the world. Exactly what it has become. A terrorist state.

And I thank all the members of the NATO Parliamentary Assembly, who today adopted the relevant resolution to confirm this and our other positions.

Today I spoke with French President Emmanuel Macron about the implementation of several points of our Peace Formula at once. Namely, about radiation safety and the situation at the Zaporizhzhia nuclear power plant, as well as about the energy security of Ukraine and Europe.

We are working to ensure the implementation of the IAEA order to stop any hostile activity against Ukrainian nuclear facilities. And for this, the demilitarization of the Zaporizhzhia nuclear power plant is extremely important. Russia must withdraw all its militants from there and stop shelling the station.

I am grateful to Mr. President Macron for his willingness to support the protection of our energy facilities. We are also doing everything to make the conference on the reconstruction of Ukraine and the implementation of our Fast Recovery Plan, in which France is ready to show leadership, as effective as possible.

Today, our energy workers had to apply not only stabilizing shutdowns, but also unscheduled ones. This is caused by a higher level of consumption than the country can provide at this time.

Therefore, I would like to appeal to all representatives of regional authorities and local communities: please do not stop communicating about the rational consumption of electricity.

Of course, energy workers, utility workers, rescuers and everyone involved are working at their maximum. But the systemic damage to our energy sphere by the attacks of Russian terrorists is so significant that all our people and businesses should be very frugal and spread consumption by hours of the day.

As of this evening, the situation is particularly difficult in Kyiv and the region, as well as in the Vinnytsia, Sumy, Ternopil, Cherkasy, Odesa regions and some other cities and districts.

Please try to limit your personal use of electricity in areas where there is the most difficulty on a daily basis, and especially during peak consumption hours. Of course, there should be a very frugal approach in public places as well.

Today is the ninth anniversary of the beginning of Maidan - the Revolution of Dignity. Ninth... But the freedom and dignity of the Ukrainian people is more than a thousand years old. It is worth remembering this.

There were many threats to the freedom of our people and the very existence of Ukrainians. But the people got through it. And now we have a historic opportunity to defend Ukrainian freedom once and for all.

I believe that it will be so.

I thank everyone who supports our country! Thank you to everyone who fights and works for Ukraine! Eternal glory and honor to all those who gave their lives for the freedom of our people!