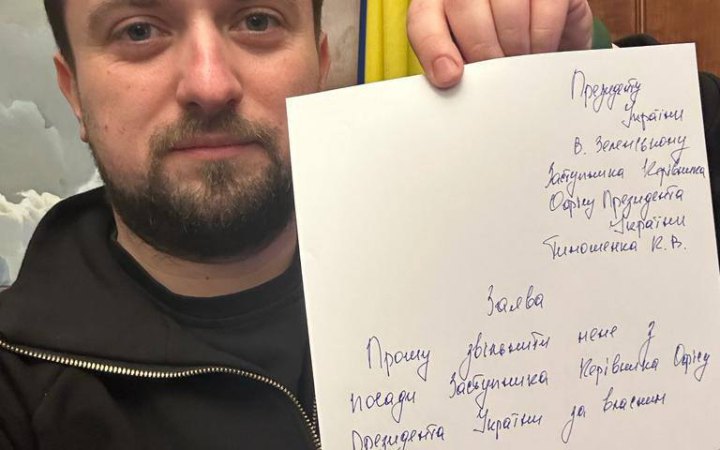 Deputy Head of the Presidential Office Kyrylo Tymoshenko has submitted a letter of resignation. He posted a photo of it on Telegram.

The president's website has already published the signed decree on his dismissal.

In his farewell post, Tymoshenko thanked President Volodymyr Zelenskyy "for his trust and the opportunity to do good deeds every day and every minute."

He also thanked the heads of regional military administrations, mayors "for being constructive in disputes," his team, Ukrainians for their trust, the Armed Forces for their fight, and his family for their support.

Tymoshenko did not give a reason for his dismissal, ending his post with the words "I am honoured", as officers do. The statement said that the dismissal was "voluntary".

Information about Tymoshenko's impending resignation has been circulating for several days, but he did not confirm his intention to resign in a conversation with LB.ua at the end of last week. Yesterday, the editorial board's interlocutors confirmed that the issue of Tymoshenko's dismissal had been resolved. Another candidate for dismissal is Energy Minister Herman Halushchenko, who needs a parliamentary vote to resign.

During the 2019 presidential campaign, he worked at the headquarters of presidential candidate Volodymyr Zelenskyy, was responsible for media and creative campaigning, and was a member of the inauguration organizing committee.

Since the full-scale invasion, he has been involved in several scandals. First, Bihus.info journalists published an investigation into Tymoshenko's use of a Chevrolet Tahoe. This car was donated as humanitarian aid by the American company General Motors.

Later, the Ukrainian Pravda reported that Tymoshenko used a $100,000 car owned by businessman Vemir Davityan and rented a mansion from Nikonov, the owner of the construction company.

Tymoshenko is the public curator of the construction sector, and Nikonov's business is in this area. When asked about a possible conflict of interest, the deputy head of the Presidential Administration said that Nikonov was not involved in government projects.

But a few weeks after this statement, Nikonov's construction company posted on its website that two residential neighbourhoods of KAN Development had joined the government's eOselya program, a preferential housing mortgage.