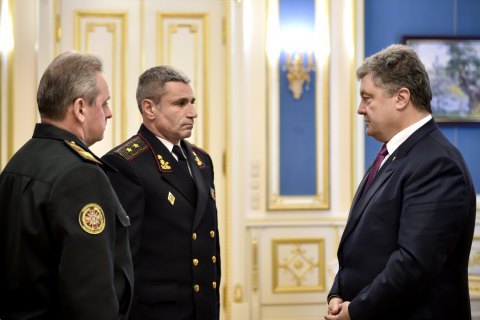 "Following the consultations with the National Security and Defence Council secretary, the Defence Ministry and the Armed Forces' General Staff commander, I decided to approve your nomination. We are giving you some time to display your best qualities," President Petro Poroshenko said at a meeting with Voronchenko, according to the president's press service.

Poroshenko recalled the events of two years ago when Gen Ihor Voronchenko displayed courage and did not breach his oath of loyalty during the illegal annexation of Crimea by Russia. He did his best to save military hardware and relocate his subordinates to the mainland.

The president said it was important for Odesa to rebuild its image of the sea capital of Ukraine and equip the Navy HQ there as soon as possible.

Voronchenko, born 1964, was the deputy fleet commander for coast guard during the annexation. In practice, he took command of all Crimea-based troops who remained loyal to Ukraine and prepared them for the deployment to mainland. He was held in Russian captivity for several days.

Later he was in charge of the antiterrorist operation troops in Luhansk Region. His most recent post was the head of the main personnel department of the General Staff.

Poroshenko dismissed previous Navy chief Serhiy Hayduk under public pressure due to his systemic underperformance and low authority among the personnel.