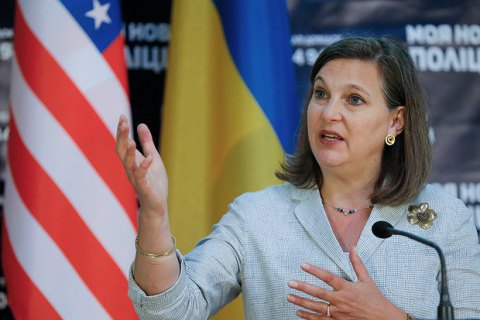 Assistant Secretary of State for European and Eurasian Affairs at the US Department of State Victoria Nuland met representatives of the parliamentary factions in Kiev on 26 April and urged them to pass necessary legal amendments so that local elections in separatist-held areas of Donbas could be held in July, the Self-Help party's press service has said. Self-Help was represented by Viktoriya Voytsytska.

"The Department of State insists that Ukraine should amend the constitution by giving a "special status" to the occupied territories of Donetsk and Luhansk regions, holding elections in the occupied territories as soon as possible and guaranteeing amnesty to militants. The Minsk agreements must be implemented by the end of 2016, there is no other option. Although Minsk is bad, Ukraine as a state agreed to it," Voytsytska quoted Nuland as saying.

"It was noted that we should understand that no-one will withdraw heavy weapons. Heavy weapons must be 'locked' and a special OSCE mission is to monitor their 'keeping in storage'. We were told that if we held the elections, this would create a precedent when Russian troops, for the first time in history, would voluntarily leave the territory they had occupied. In the best case scenario, if Ukraine demonstrates its good will to implement Minsk and passes the law on elections in occupied territories in May, the sanctions [against Russia] will be extended in June by another nine months, until January 2017. The elections in the occupied territories are expected to be held as soon as in July," Voytsytska said.