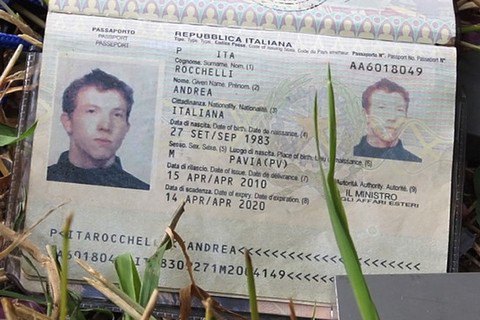 A Ukrainian serviceman, identified by Ukraine's Deputy Prosecutor-General Yevhen Yenin as Vitaliy Markov, has been detained in Bologna on suspicion of involvement in the death of Italian journalist Andrea Rocchelli from a shrapnel wound near Slovyansk on 24 May 2014. Translator Andriy Mironov was killed and French stringer William Roguelon was wounded.

According to La Repubblica, the detained serviceman holds Ukrainian and Italian citizenships. Allegedly, he went to Ukraine in late 2013 to take part in the Euromaidan protests. He then joined a volunteer unit of the National Guard of Ukraine. Investigators believe he was on the Karachun hill near Slovyansk on the day when Rocchelli was killed during mortar shelling.

Yevhen Yenin said that the Prosecutor-General's Office was surprised by the detention.

"According to Ukrainian investigators, the death of two journalists happened as a result of an artillery barrage by the Russian-terrorist troops. The Prosecutor-General's Office has already demanded that the Italian authorities to present hard evidence of Vitaliy Markiv's guilt or release him immediately," he said.

Markiv is a volunteer serviceman of the Kulchytskyy battalion. Born in Khorostkiv of Ternopil Region, he moved to Italy with his mother and sister during his teen years.

MP Andriy Antonishchak, a coordinator of the battalion, described the detention as a "brutal, cynical provocation", adding that the unit did not have any mortars at the time.

The National Guard said it was concerned about the detention, adding that it had not been notified officially.

The Ukrainian authorities denied involvement in Rocchelli's death. The antiterrorist operation troops' closest positions were indeed on Karachun Mountain but they did not use any mortars in the area on 24 May. However, during that day terrorist groups in Slovyansk repeatedly fired mortars on the positions of Ukrainian troops, according to reports by the Information Resistance group, a key source of updates on the antiterrorist operation at the time.