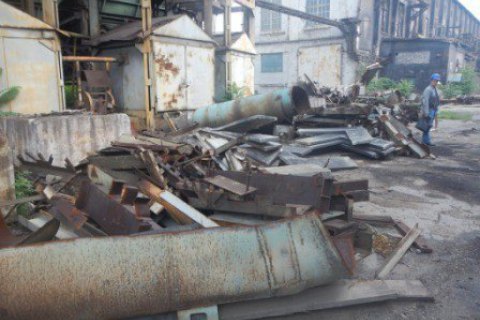 The investigators of the Security Service of Ukraine (SBU) has declared nine members of an international criminal ring, including three Russian citizens, suspects in the case on the destruction of the Zaporizhzhia Aluminium Combine (ZALK) in the interests of competitors from Russia.

In a statement, the SBU said on Tuesday: "The only primary aluminum producer in Ukraine has been deliberately destroyed in the interests of Russian metal producers since 2006. To run the scheme, in 2006–2008, the masterminds formed an organized group made of representatives of the Russian company RusAl, the former management of the plant, Ukrainian businessmen and foreign citizens."

According to the SBU, companies affiliated with a Russian businessman first acquired a controlling stake in ZALK, and then "under the guidance of Russian handlers" ensured the destruction of its main production facilities. In particular, in 2009 they halted the ore-thermal furnaces and main production facilities of the electrolysis plant, which resulted in the damage and subsequent complete destruction of the equipment.

Two years later, the members of the group transferred the ZALK subsidiary Hlukhiv Quartzite Quarry to companies affiliated with RusAl, a Russian aluminum giant, and further intensified the company's destruction before the plant was nationalised in 2015 over gross violations during its privatisation.

"In particular, they carried out the resumption and liquidation of ZALK's fixed assets, which led to the destruction of the complete production cycle of the final product of the enterprise." To destroy the strategically important plant, the group dismantled and removed the valuable equipment from its territory, and then handed over the liquid assets of the aluminum rod shop to a company controlled by Russian owners," the report reads.

According to the report, the criminal activities of the group of suspects have inflicted the damages of 39m dollars and over 100m hryvnyas on Ukraine.

One of the suspects is in custody while the former CEO of the combine has been released on bail.

In 2001, the State Property Fund of Ukraine sold the ZALK to Russia's AvtoVAZ-Invest. Under the terms of the contract, the investor had to pay 380m hryvnyas for the company's stock, and settle the plant's outstanding 75m-dollar debt to Ukreximbank. However, AvtoVAZ-Invest, as well as Cyprus-based Velbay Holdings, which later repurchased the ZALK stock, failed to settle the debt. Velbay Holdings Ltd is known to be controlled by Oleg Deripaska's RusAl, one of the world's largest aluminum producers.

Because the buyer failed to honour its investment commitments, Ukraine began the process of ZALK nationalization, which was completed when the Ukrainian Supreme Court said in March 2017 that the state's claims to the stake were legitimate.