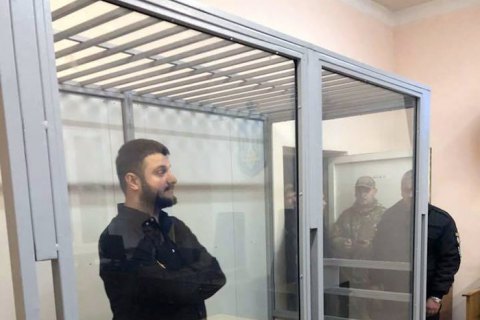 Kyiv's Solomyanskyy district court has released Oleksandr Avakov, the son of Interior Minister Arsen Avakov, from custody under personal guarantee. He is suspected of involvement in embezzlement at the Interior Ministry.

He must report any change of residence, hand in his passport, wear an ankle monitor and not communicate with witnesses.

The court dismissed his lawyers' request to void his detention as illegal.

The court also released the second suspect in the case, former Deputy Interior Minister Serhiy Chebotar, under personal guarantee for two months on the same terms as Avakov.

On 31 October, the National Anticorruption Bureau of Ukraine detained three persons in the case of a possible embezzlement of 14m hryvnyas during the purchase of tactical backpacks by the Interior Ministry. The three are Oleksandr Avakov, his business partner Volodymyr Lytvyn and former Deputy Interior Minister Serhiy Chebotar.

Interior Ministry Arsen Avakov dismissed any allegations of his family's involvement in the purchase.