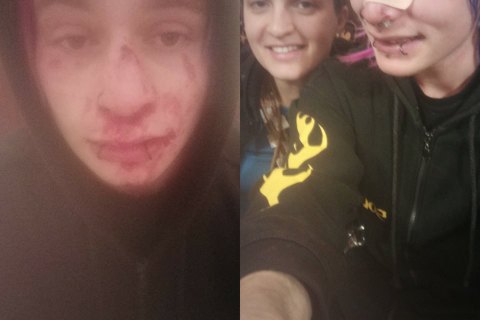 After checking out from his apartment, he was walking with his suitcase in the city centre when he was attacked by unidentified assailants opposite St Michael's Cathedral.

At first, they threw snowballs at him and kicked his suitcase. After he ignored them, they knocked him off his feet and started kicking him, psychologist Maria Makukha told Hromadske Radio.

She was in the area when he saw a disappointed young man with snow around him covered in blood.

She checked on him and called the police. She also accompanied him to emergency care so he could be examined by doctors.

"Clearly, it was not a robbery (nothing has been stolen from him). It is due to intolerance, because the person looked like, let's say, rather transgender – he has pink hair and his nose is pierced - a young boy, possibly a student," she said.

She insisted that police open the case, which were reportedly reluctant to do this.

"If it were not for me, I am sure, they would have hushed up the case because he had only two hours before the flight," Makukha said.

Hromadske Radio learned from Kyiv's Shevchenkivskyy district police that the case had been registered over "deliberate light bodily injuries".

"I genuinely thought I was going to die. They managed to jam one of my piercings inside my lip, which had to be surgically opened, there's a painful cut under my eye, mm away for the eye. My nose is (Thankfully) only part fractured, although has been bleeding for 10hours (As of when this happened) my right arm is quite bruised but bearable, 5/6 of my front teeth are completely fucked and in serious agony, even just from breathing. But other than that, I'm.. okay, I guess, just in a lot of pain right now, especially my teeth a lot, " Liam Anthony Tong said in his account of the incident on Facebook upon return to Britain.

A tribute to late Russian rights activists Stanislav Markelov and Anastasiya Baburova was held in the same area at the time of the attack.

Around 50 young people confronted a dozen of participants in the event, mostly left-wing activists. They threw snowballs and other things at the event participants and abused them verbally.