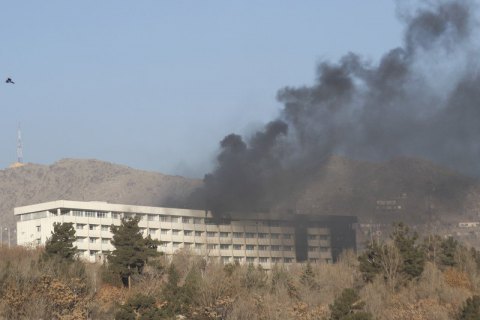 Ukrainian Foreign Minister Pavlo Klimkin has briefed President Petro Poroshenko on the death of Ukrainian nationals as a result of the attack on Intercontinental Hotel in Kabul, Afghanistan.

"I reported to the president on the death of six citizens of Ukraine as a result of the attack on the hotel in Kabul. We are working with Afghan law-enforcement agencies to learn the details of this terror act," Klimkin tweeted.

Earlier, Kabul police told the BBC that nine Ukrainians, one German, one Greek and one Kazakh citizen had been confirmed dead. Afghan airline Kam Air says a number of its employees were killed and some are still missing.

Eight out of nine Ukrainians reportedly killed in the hotel worked for Kam Air. Two of them were stewardesses, the Hromadske news website learned from Baber Khan Sahel, a correspondent for the Spanish News Agency (EFE) in Afghanistan.

"The interior minister said that the killed foreigners, including Ukrainians, were killed in a remote area of the hotel. They were found during a search mission," he told Hromadske.

"@KamairRQ confirmed to @EFEnoticias ten of its employees-8 Ukrainians and two Venezuelans- killed in Kabul Hotel attack, they were air crew, including pilots," Sahel tweeted.