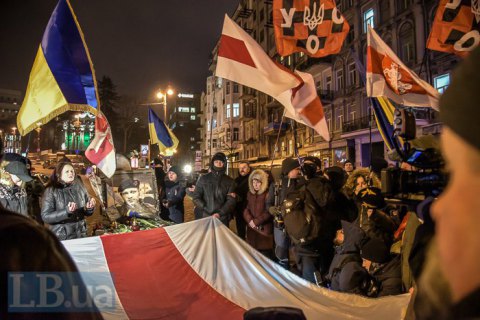 A procession to commemorate Mikhail Zhyznewski, a Belarusian activist killed during the Euromaidan protests in Kyiv's Hrushevskyy Street on 22 January 2014, walked through the centre of the Ukrainian capital, according to an LB.ua correspondent.

The event was held on his birthday. Representatives of the Belarusian solidarity movement Razam in Ukraine and Ukrainian activists walked along the way which was his last path four years ago.

Participants in the event met in Mykhaylivska Square near the Countess Olha Monument where they had a brief rally. Afterwards, a small group of people walked towards the Zhyznewski Monument in Hrushevskyy Street to lay flowers and light candles.

Euromaidan activist Mikhail Zhyznewski, who was later decorated as Hero of Ukraine, was one of the first three victims among the protesters in Kyiv in January 2014.

The Heavenly Hundred, as the killed protesters are collectively known in Ukraine, was commemorated in Kyiv on 22 January.