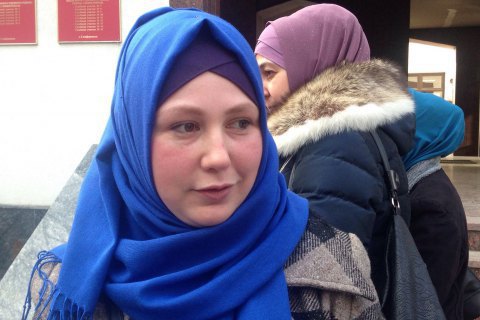 On 6 February, a judge of Simferopol's Zalizhnychnyy district court in Russia-annexed Crimea, Halyna Tsyhanova, acquitted Fera Abdullayeva, the wife of political prisoner Uzair Abdullayev, over the absence of crime, according to an LB.ua correspondent.

"I was shocked by the unexpectedly fair court ruling. Indeed, there was no evidence that I had violated anything," Abdullayeva said.

She was accused of "failing to obey a legitimate instruction of a bailiff to ensure court order and stop to violate court rules" (Article 17.3 Part 2 of the Administrative Code of Russia).

According to Abdullayeva, she was in the court on 8 December trying to catch a glimpse of her husband arrested in the case of the pan-Islamic movement Hizb ut-Tahrir banned in Russia but not in Ukraine. One of the bailiffs accused her of shouting and thus showing contempt of court.

"We did not expect a far ruling but, nevertheless, it happened today. For Russian courts in Crimea, it is an exception rather than rule. Fera's husband Uzair Abdullayev is still behind bars. His criminal case is politically motivated," lawyer Lilya Gemedzhi said.