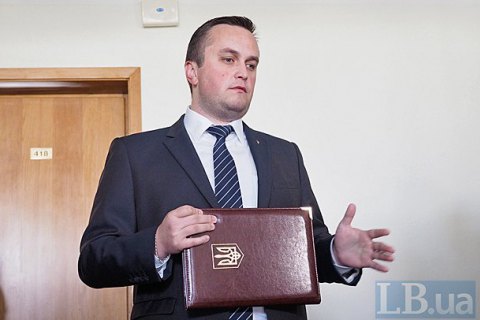 Ukrainian Prosecutor-General Yuriy Lutsenko has submitted a motion to the Qualification and Disciplinary Commission of Public Prosecutors to dismiss the chief of the Specialised Anticorruption Prosecutor's Office (SAPO) Nazar Kholodnytskyy.

"In the framework of criminal proceedings, which are investigated by a joint group of the Prosecutor-General's Office and the National Anticorruption Bureau of Ukraine (NABU) on the facts obtained during the investigation, which are declassified as required, the Qualification and Disciplinary Commission of Public Prosecutors has received disciplinary complaints with the signatures of the prosecutor-general and the NABU chief on disciplinary offences committed by Kholodnytskyy," Lutsenko said on Facebook on Friday, 30 March.

"In my motion, I ask the commission to consider the dismissal of Nazar Kholodnytskyy as deputy prosecutor-general, the SAPO's head," he said.

Later in the day Kholodnytskyy denied all the allegations and said that he was not going to resign.