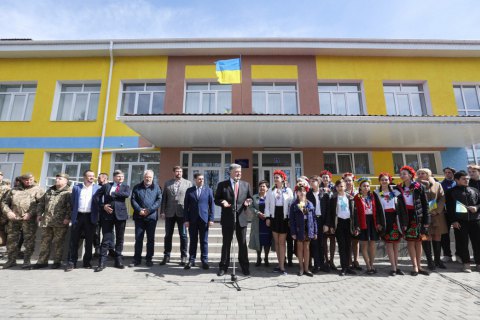 Ukrainian President Petro Poroshenko has said on a visit to Donetsk Region that Donbas has been and will be his priority. He was visiting Volnovakha School No 5, according to the presidential press service.

"We here (in Volnovakha - Ed.) must demonstrate that Ukraine goes on and develops. That is why Donbas was, still is and will be my priority. And we are transferring budget funds to restore Donbas, develop and repair damaged housing, restore infrastructure and bridges, and build roads, after all. And it is very important to build schools and kindergartens," Poroshenko said.

He also noted that the restoration of war-stricken Volnovakha is a common task. In addition, Poroshenko touched upon the issue of a peacekeeping mission for Donbas, which, in his opinion, would clear the region of Russian troops.

"And Ukrainians in the occupied territories will think: why should we suffer, why were the factories stopped, equipment was dismantled and moved to Russia, why unemployment is rising, nursing homes are being closed, why 15% of children cannot go to school, why kindergartens are closed? And no-one will accept the invaders' explanation that they are protecting the "Russian world"... These are our people, Ukrainians. And we will return the Ukrainian land peacefully," Poroshenko stressed.

Poroshenko also called on the military in Donbas to maintain combat readiness.

"We need to keep gunpowder dry. We need to be ready to demonstrate at any time the fighting capacity of Ukrainian forces," he said at a meeting with servicemen of the 79th assault brigade and National Guard soldiers.

Poroshenko and German Chancellor Angela Merkel are scheduled to hold talks on peacekeepers in Donbas on 10 April.