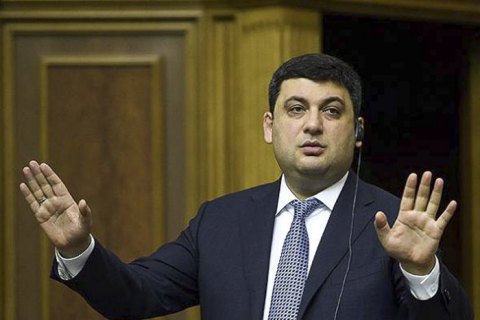 Prime Minister Volodymyr Groysman has said that the government lacks authority to resolve all pressing issues it has been facing.

He stated this at the social and political forum held by the Reanimation Package of Reforms "Reforms at gunpoint: dialogue between the public and the government", according to Ukrinform.

"The government has much less authority compared with the tasks faced by the executive and the government of Ukraine. It is also necessary to develop amendments to the law on the Cabinet of Ministers of Ukraine. Of course, we need, among other things, to amend the constitution to ensure the distribution of powers with regard to decentralization, bring the legislation as a whole to a clear distribution of responsibilities and powers," Groysman said.

According to him, Ukraine has an overly regulated legislation and old, complicated lawmaking procedures. "At the same time, the legislation of Ukraine does not define the general framework and definitions, but specifies all the steps in detail, which makes it impossible for the executive to act more dynamically. And here we need a very serious dialogue in terms of changing this model," the prime minister said.

However, in the autumn of 2017, President Petro Poroshenko said he did not see a chance to carry out cardinal constitutional reform with a redistribution of powers between the president, parliament and the government.

In September 2017, Prime Minister Volodymyr Groysman also said that he did not need a new constitution. As soon as in the winter he changed his mind and suggested Ukraine should decided whether "we are a parliamentary-presidential country or a presidential-parliamentary one after all".