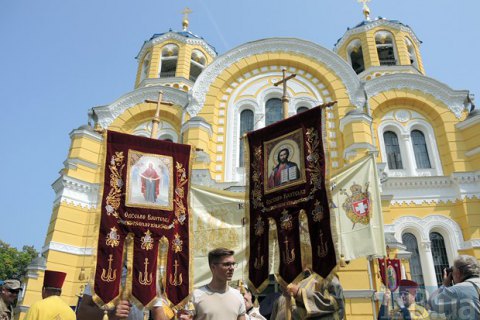 The Ukrainian Orthodox Church of the Kyiv Patriarchate (UOC-KP) has called on the Ukrainian Orthodox Church the Moscow Patriarchate to support efforts to overcome the church split and receive a tomos, a document which defines the geographical boundaries of the autonomous church and its relationship with the autocephalous church to which it refers, the UOC-KP has said on its website.

"Lately, the entire episcopate of the Kyiv Patriarchate signed an appeal to ecumenical Patriarch Bartholomew asking him to provide a tomos on the autocephaly of the Orthodox Church in Ukraine. The episcopate of the Ukrainian Autocephalous Orthodox Church signed a similar request. We hope that there are responsible hierarchs in the UOC Moscow Patriarchate episcopate who are truly worried about the future of Orthodoxy in Ukraine and will support efforts on the canonical recognition of Ukrainian church independence by the ecumenical patriarch," the UOC-KP said.

At a meeting with parliamentary faction leaders on 17 April, President Petro Poroshenko said that the UOC-KP and the UAOC signed an appeal to the Patriarch of Constantinople Bartholomew asking him to grant autocephaly to the new local Orthodox Church of Ukraine.

He suggested the Church of Constantinople may consider the issue at its next meeting.