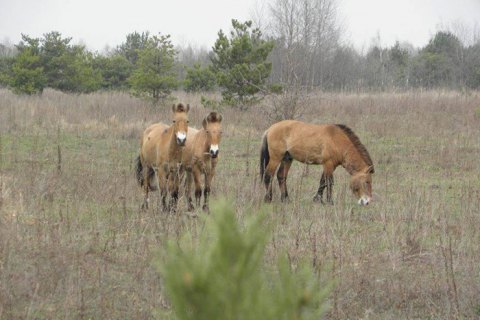 Scientists have suggested the population of Przewalski's horses in the Chornobyl alienation zone may have reached around 110 as of early 2018, the press service of the State Agency for the Alienation Zone Management of Ukraine has said.

In the spring of 2018, a team of researchers from Warsaw University of Life Sciences, the Zoology Institute of the Ukrainian National Academy of Sciences, the Askaniya-Nova biosphere reserve and the Chornobyl radiation ecological biosphere reserve visited the area and managed to identify 47 Przewalski's horses. However, they suggested that their population is at least twice as many.

According to the head of flora and fauna ecology of the Chornobyl reserve, Denys Vyshnevskyy, the horses look healthy, therefore their population is expected to increase.

These wild horses were brought to the alienation zone from Askaniya-Nova in 1998. This was the only free population of Przewalski's horses at the time, which included 20 specimens.