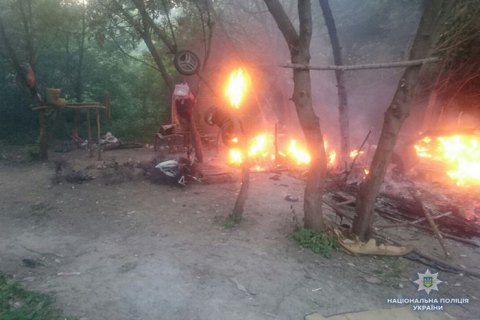 A group of young men armed with baseball bats attacked a Roma camp in Ternopil Region on the evening of 22 May, the locan news website 20 Minut has reported.

According to the morning update by police, the camp is located on the outskirts of Ternopil near a sugar refinery in the village of Velyka Berezovytsya.

There were seven adults and 33 children in the camp when it was attacked. They came there from Transcarpathian Region and earned money collecting scrap metal.

The victims said they were making a dinner on the fire when a group of around 15 people ran into the camp and opened fire. Romans ran away into the woods. Their tents were burnt.

Police opened a case over hooliganism.

Ukrainian ombudsperson Lyudmyla Denysova is also looking into the incident. She is concerned about obvious ethnic discrimination and fueling of hatred against the Roma minority.

A Roma camp in Lviv Region was burnt in May.

In April, representatives of the far-right group C14 burnt down a Roman camp in Kyiv's Lysa Hora neighbourhood.