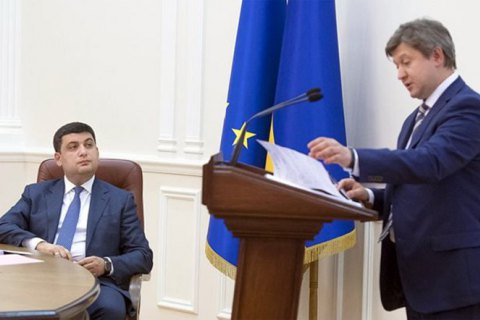 Finance Minister Oleksandr Danylyuk and Prime Minister Volodymyr Groysman have had yet another verbal exchange at a meeting of the Cabinet of Ministers.

It happened after Danylyuk demanded, in a manner which sounded like an ultimatum, that the candidate for his fifth deputy, which he nominated a long time ago, be finally approved. Groysman did not fold in and answered that he would not do this.

Danylyuk replied by suggesting that the cabinet may as well prepare a motion for his dismissal, ministers present at the meeting told LB.ua.

They said it was clear from Groysman's response that he was going to do just that, namely to ask parliament's permission to have Danylyuk fired.

"Let them dismiss me if they want to. I am not going to step down on my own, I'm not that kind of a person," Danylyuk said in an exclusive commentary to LB.ua, having de facto confirmed he had a dispute with the prime minister.

"I still insist that the Finance Ministry should be fully manned and work in line with the law," he concluded.

Oleksandr Danylyuk was appointed finance minister in Volodymyr Groysman's Cabinet of Ministers under the Petro Poroshenko Bloc's quota in April 2016. Last summer Prosecutor-General Yuriy Lutsenko asked the Cabinet of Ministers to dismiss Danylyuk because an inspection by the State Fiscal Service confirmed that he had not paid 700,000 hryvnyas in taxes. Danylyuk responded by demanding Lutsenko's dismissal for sabotaging the investigation into Privatbank.

In early May, Kyiv's Pecherskyy district court gave the Prosecutor-General's Office access to information about the money Danylyuk made working for CEE Investment&Advisory LLP and Rurik Real Estate Investment Limited.