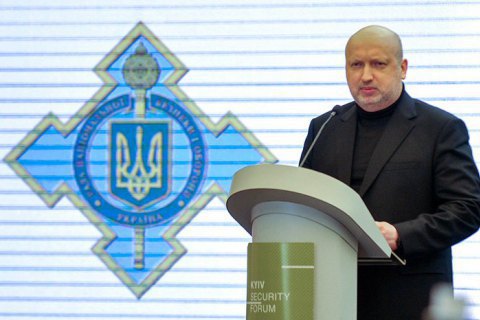 The secretary of the National Security and Defence Council of Ukraine, Oleksandr Turchynov, has said that Russia is trying to sow chaos and disappointment as part of its hybrid war against Ukraine.

He was speaking at the 9th National Expert Forum organized by Gorshenin Institute in Kyiv on 7 June.

"One of the main elements of the hybrid war that they are waging against us is the destabilization of the situation inside our state. Very dangerous technologies - sabotage and terror – are being used. You remember the killings of [Russian ex-MP Denis] Voronenkov and [volunteer fighter and activist Amina] Okuyeva, an attempt on the life of journalist [Arkadiy] Babchenko, the targeting of journalists, social activists. All of this is done to sow chaos, despair and break the Ukrainian people's ability to put up resistance," he said.

Turchynov noted that one of the main elements of this war against Ukraine is an information and cyber aggression. "The cyberattacks last year dealt a terrible blow to our economy. It cost us billions," he said.

At the same time, Turchynov said that compared with last year, Ukraine has managed to make a big step forward in terms of cyber defence.

"The National Coordination Centre for Cybersecurity has been set up under the National Security and Defence Council. In a very short time, we have achieved significant results. In fact, a security contour has been built to reliably protect the information resources of state institutions. We are starting to protect strategic infrastructure systems. According to expert estimates, we have reached the level of many EU countries in terms of cyber defence capabilities," Turchynov added.