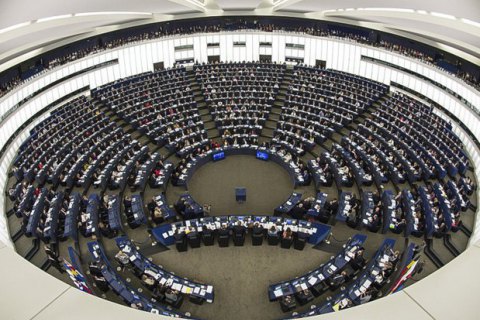 The European Parliament, in a resolution adopted at a plenary meeting in Strasbourg on 14 June, has demanded that the Russian authorities "immediately and unconditionally" release Ukrainian filmmaker Oleh Sentsov and "all other illegally detained Ukrainian citizens in Russia and on the Crimean peninsula", Interfax-Ukraine has reported.

In this document, the European Parliament "expresses its solidarity with the Ukrainian filmmaker, political activist and political prisoner Oleg Sentsov, who began a hunger strike on 14 May 2018 to press for the release of illegally detained compatriots, and is concerned about the effects of the hunger strike on Oleg Sentsov’s health."

The resolution states that Sentsov "was arrested in Crimea shortly after Russia took control over the Black Sea peninsula in 2014 and then sentenced on the basis of testimony received under torture, is now serving a 20-year sentence on multiple terrorism charges in a high-security prison camp in the Yamal Nenets region in Russia's far north."

MEPs deplored the fact that another convict in the case, Oleksandr Kolchenko, had been sentenced to ten years in prison and noted that "another illegally detained Ukrainian citizen, Volodymyr Balukh, is on hunger strike since 19 March."

The European Parliament "calls on the responsible Russian authorities and medical services to give these imprisoned individuals proper medical attention and to respect medical ethics, including by not imposing force feeding or any unwanted treatment that may amount to torture and other forms of ill treatment."

MEPs expressed deep concern that "many of the Ukrainian political prisoners, such as Mykola Karpyuk, Volodymyr, Prysych, Oleksiy Chyrniy and Yevhen Panov, have been seriously tortured."

According to the resolution, currentl,y there are in total more than 70 Ukrainian political prisoners in Russia and in occupied Crimea.

The European Parliament "condemns Russia's violations of international law in occupied Crimea, including the enforcement of Russian legislation, the heavy militarization of the Crimean peninsula, which threatens the regional security, and the massive and systematic human rights violations targeting, in particular, ethnic Ukrainians and Crimean Tatars."

According to European parliamentarians, "Russian courts, whether military or civilian, are not competent to judge acts committed outside the internationally recognized territory of Russia, and points out that judicial proceedings in such cases cannot be regarded as legitimate."

The document stresses that "the treatment of all prisoners must meet international standards and that all detainees should have access to legal counsel, to their families, to their diplomatic representatives and to medical treatment; stresses that the Russian authorities and judicial personnel bear full responsibility for the safety and wellbeing of those detained, especially in Crimea, in line with the Fourth Geneva Convention."

The resolution passed in Strasbourg goes beyond the fate of Ukrainian prisoners in Russia. MEPs also demanded "the immediate and unconditional release of Oyub Titiev, Director of the Human Rights Centre Memorial in the Chechen Republic, and all other political prisoners in the Russian Federation."

The document demands that "the Russian authorities cease the intimidation and harassment of the Human Rights Centre Memorial, its staff and other human rights defenders, and allow them to carry out their human rights work."

The resolution calls on the EU "to make a statement to condemn human rights violations in Russia and the attempt to hide them under the cover of the FIFA World Cup."