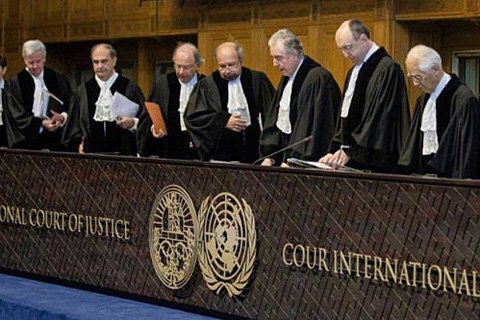 Ukraine’s Application before the ICJ seeks redress for Russia’s ongoing and systematic violations of the Terrorism Financing Convention and the CERD. In June 2018, Ukraine filed its Memorial supporting its claims, accompanied by extensive evidence documenting Russia’s serious violations of both Conventions. Russia filed jurisdictional objections with the Court in September 2018.

Ukraine’s Written Statement filed with the Court today demonstrates conclusively that the Court has jurisdiction to hear all of Ukraine’s claims, the Foreign Ministry said:

"First, Ukraine demonstrates that it has satisfied all requirements for the Court to exercise jurisdiction over the parties’ disputes concerning the interpretation and application of the Terrorism Financing Convention and the CERD.

Second, Ukraine establishes that many of Russia’s objections are inappropriate in this preliminary phase of the proceedings, as they go to the merits of the dispute.

Third, Ukraine shows that while interpretive disputes under the Conventions should be resolved at the merits phase of these proceedings, were the Court to address such disputes when ruling on jurisdiction, they should all be resolved in favor of Ukraine.

Ukraine initiated its case against the Russian Federation in January 2017. In April 2017, the Court issued provisional measures, ordering the Russian Federation to refrain from maintaining or imposing limitations on the ability of the Crimean Tatar community to preserve its representative institutions, including the Mejlis, to ensure the availability of education in the Ukrainian language, and not to aggravate the dispute before the Court.

The next procedural step in the case will be a hearing on Russia’s jurisdictional objections, after which the Court will issue a decision on jurisdiction.

Ukraine is confident that the Court will find that it has jurisdiction over Ukraine’s claims and that Russia will ultimately be held accountable for its serious violations of both the Terrorism Financing Convention and the CERD once the case proceeds to the merits."