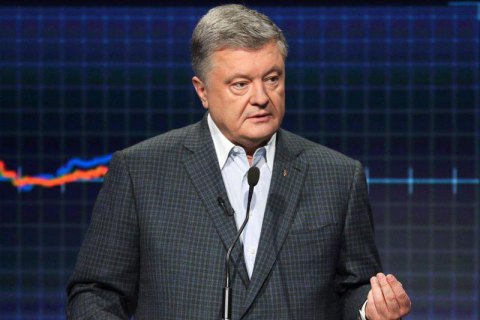 President Petro Poroshenko has spoken against arms legalisation and in favour of tightening the procedure for its registration.

He was speaking on the UA:First public TV channel where he arrived to take part in an election debate.

"Today there is a huge amount of arms in Ukraine because of the war. This creates huge risks to security in the streets. As the president and supreme commander of the Armed Forces of Ukraine, I emphasise that the presence of short-barrelled arms in Ukrainians' hands will not help security. The risks which can be posed by the use of weapons in the streets of Ukrainian cities, villages and towns are absolutely unjustified. Today the availability of weapons is absolutely illegal. Registration of weapons should even be tightened. I firmly believe that weapons must be removed from Ukrainian streets. My political position: I am against the legalisation of short-barrelled weapons in Ukraine," he said.

Poroshenko added that the legalisation of weapons in any country of the world did not lead to a decrease in crime, but rather had the opposite effect of increasing the number of victims.

He was answering the question about what he was prepared to do to ensure that Ukrainians could protect their lives and health because “gangsters on the black market can buy short-barrelled arms and use them against law-abiding but unarmed citizens”.

This question came from the former head of the Odessa branch of the Right Sector, Serhiy Sternenko, who killed one of the two attackers in Odesa in May 2018.