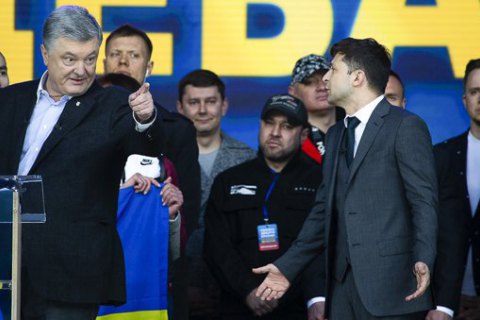 President Petro Poroshenko and comedian Volodymyr Zelenskyy have held a public debate at Kyiv's Olympic Stadium ahead of the 21 April presidential election runoff.

Below are some of their quotes.

"I will accept any choice of the Ukrainian people on 21 April. Life will go on the 22nd."

"Millions of Ukrainians will fight for the future of Ukraine, will protect the achievements of the past five years. They will protect the Ukrainian soil… We will not allow anyone to ruin our state which we love above all. You will not succeed, Mr Volodymyr. And I will protect it in any role – as the president or candidate."

"It is the right of the Ukrainian nation to know what exactly a presidential candidate of the country at war is going to do? And what is he going to do, not his HQ, consultants or advisers."

He does not think that Zelenskyy "dreams of surrendering Ukraine to Russia", however Putin has such a dream.

"Your team said that you were already receiving basic military training. This is a good thing. However, you should have started four years ago, in 2014, when the country need volunteers but Volodymyr was dodging summons to a military recruitment office."

"Petro Poroshenko has had many achievements: visa-free travel, the tomos, language and army, everything you have mentioned on hoardings. But it seems to me that for some reason you have claimed all these achievements as your own only."

"As for Mr [Ihor] Kolomoyskyy, I will tell you. All the Svynarchuks, Hladkovskyys… and even if Kolomoyskyy is among them will go to prison. But this is not a matter of two weeks. They will be locked up if they violate the law".

"This is not a promise. It is a serious matter. It is a matter for Ukrainian court. They will be locked up when they violate the law."