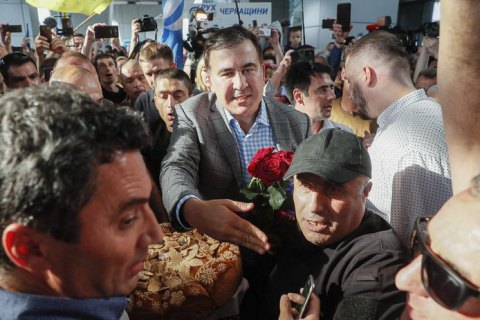 The former head of the Odesa regional administration and Georgian ex-president, Mikheil Saakashvili, has returned to Ukraine after President Volodymyr Zelenskyy restored his Ukrainian citizenship.

At Boryspil airport, where he arrived from Warsaw by plane, he was greeted by dozens of his supporters and a large crowd of journalists.

After he passed passport control, he was greeted by a crowd chanting "Misha".

His Ukrainian citizenship was terminated in the summer 2017 after it was found that he stated false information in his citizenship application. He was detained six months later and flown to Poland under a readmission procedure for violation of state border.

He was issued an identity card in the Netherlands where his wife is a citizen.

In December 2017, Saakashvili was declared a suspect in collusion with a criminal organization of businessman Serhiy Kurchenko who flourished under ex-President Viktor Yanukovych.