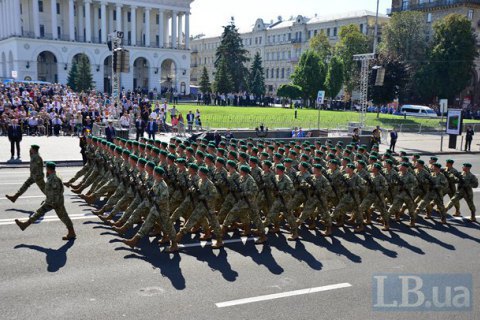 The presidential office has selected a format that will replace a traditional military parade on Independence Day in Kyiv on 24 August, its head Andriy Bohdan has said at a briefing.

"Instead of the traditional Soviet-style parade with an expensive demonstration of military equipment in Kyiv's central street, a Procession of Dignity will take place. This European-style event is designed to begin a new tradition of honouring people Ukraine is proud of," Bohdan said.

Representatives of different branches of the army are planned to walk along Khreshchatyk. Donbas war veterans will be able to join their brigades. Medics, teachers, athletes, diplomats and volunteers will also take part.

"President Volodymyr Zelenskyy and the leadership of the state will take part in the procession," Bohdan said.

"There will also be a grand concert in central Kyiv. One of the most famous Ukrainian directors is organising this event," he said.