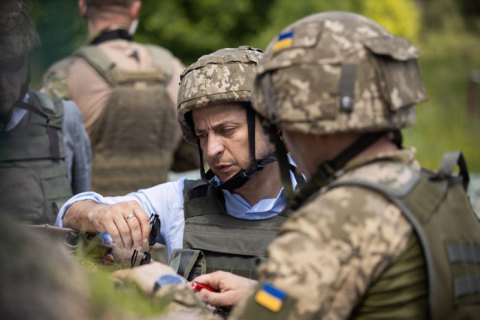 President Volodymyr Zelenskyy has announced that pro-Russian militants have disrupted the ceasefire declared as of 21 July.

He made this statement in connection with the killing of four Ukrainian soldiers from the 36th Marine Brigade near Pavlopil this morning when they were equipping a platoon strongpoint.

"Four Ukrainian soldiers were killed near Pavlopil as a result of shelling from a hand-held anti-tank grenade launcher. The bread truce has lasted 17 days. Today’s incident is aimed at undermining not only this truce but the negotiation process as a whole. Ukraine sincerely seeks peace. And our desire is unchanged. Today, the whole world saw who exactly does not want peace," the president said on Facebook.

Zelenskyy called on the leaders of the Normandy Four - Emmanuel Macron, Angela Merkel and Vladimir Putin - to hold a summit as soon as possible to resume peace negotiations.

The president expressed his condolences to the relatives of the killed soldiers.

He said that this attack would not go unanswered.