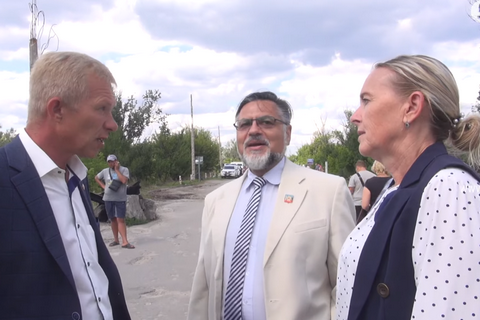 The Security Service of Ukraine (SBU) has said on Facebook that detaining Vladyslav Deyneho and Olha Kobtseva, representatives of the self-proclaimed Luhansk People's Republic, would serve a reason to accuse Ukraine of breaching the Minsk agreements.

"The appearance of the 'parliamentarians' of the quasi-republic near the Stanytsya Luhanska checkpoint is a well-thought-out, conscious and deliberate provocation on the part of the terrorists and their Russian handlers. The detention of Kobtseva and Deyneho in the neutral zone would give the occupiers a reason to say that Ukraine breached the Minsk accords and supposedly violated the ceasefire," the SBU said.

At the same time, the service confirmed that both Deyneho and Kobtseva are persons involved in criminal proceedings for infringing on state sovereignty, constitutional order and territorial integrity of Ukraine.

The SBU promised that they would be prosecuted but later.

On 6 August, LPR representatives Vladyslav Deynego and Olga Kobtseva, who represent the militants at the Minsk negotiations, crossed the line of contact into government-controlled Stanytsya Luhanska. Journalists of the Ukrainian news-based 5 Kanal TV became witness to their skirmish with the head of the Stanytsya Luhanska district state administration, Yuriy Zolkin.