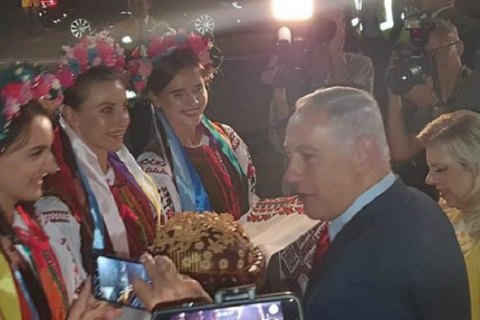 Israeli Prime Minister Benjamin Netanyahu has commented on the so-called bread incident during the reception at Kyiv Boryspil airport.

According to earlier reports, his wife, Sara Netanyahu, dropped a piece of bread offered to her upon arrival as part of a Ukrainian tradition. This prompted a lot of criticism both in Ukraine and Israel.

Netanyahu called his visit to Ukraine "historic" and ironically expressed doubt that it would have received as much media coverage had it not been for the incident.

Netanyahu quoted the Ukrainian presidential office as saying: "It is clear that Ms. Netanyahu did not intend to show disrespect for Ukraine. This is complete nonsense.|

The head of Israel said that his wife specifically chose her clothes in the national colours of Ukraine.

"She left the plane in yellow and blue clothes. It was out of respect for Ukraine. But what will I tell you?! If it takes this to pay attention to the visit which brings the agreement on free trade, the representative office of Ukraine in Jerusalem and other important achievements, okay, so be it," he said.