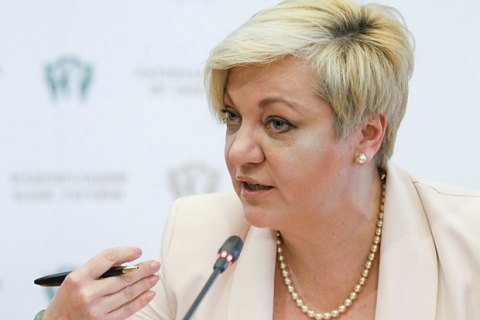 Law enforcers raided the flat mentioned as the official residence of a former head of the National Bank of Ukraine (NBU), Valeriya Hontareva, today, she has told Interfax-Ukraine.

"The door of my flat in Velyka Zhytomyrska Street in Kyiv, where I am registered, has just been jimmied and 10 persons in body armour are raiding it. Yesterday it was PrivatBank, today it is me," she said.

She noted that no-one lived in the flat because she had not been home for almost a year. "My lawyer has long let the Prosecutor-General's Office and the State Bureau of Investigation (SBI) know about my whereabouts in London," she said.

SBI director Roman Truba said earlier today that the defence concern Ukroboronprom was being searched as part of the case of the abuse of office by NBU officials in 2016.

Hontareva is currently based in Great Britain because she was employed by the London School of Economics after she stepped down as NBU governor.

In late August 2019, Hontareva was hit by a car in London and had to be admitted to hospital. She will have to undergo a long rehabilitation course.

In early September 2019, a car of Hontareva's daughter-in-law burnt down in central Kyiv.

Hontareva said that if she was "further harassed", she would request political asylum in Great Britain.