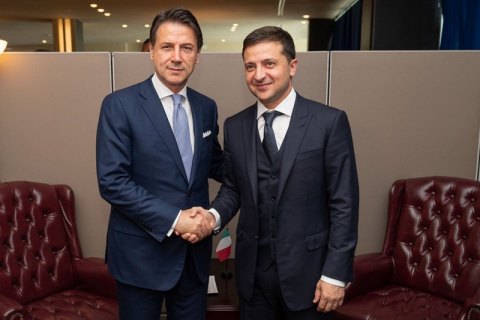 As part of his participation in the 74th session of the UN General Assembly, President of Ukraine Volodymyr Zelenskyy has met Italian Prime Minister Giuseppe Conte.

According to Zelenskyy's website, he congratulated Conte on his recent reappointment and formation of a new coalition government. He also invited the Italian prime minister to visit Ukraine.

The parties discussed a wide range of issues of bilateral and multilateral agenda. They also noted the intensification of cooperation in the investment sphere.

Volodymyr Zelenskyy urged Italy to invest in infrastructure, in particular ports, and underscored the large-scale privatization in Ukraine.

The issue of Vitaliy Markiv, a Ukrainian citizen convicted in Italy, was separately raised. The head of state expects a comprehensive and unbiased investigation of the case. He also suggested to establish a joint investigation team to clear up the circumstances of death of Italian journalist Andrea Rocchelli.

During the meeting, the parties also discussed the importance of continuing the sanctions policy against Russia. The Italian prime minister stressed that sanctions could not be lifted until the restoration of Ukraine's territorial integrity and sovereignty.