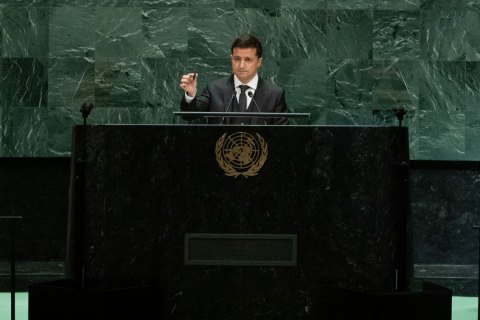 President of Ukraine Volodymyr Zelenskyy has stated that his task was to end the war in Donbas, return all the occupied Ukrainian territories and restore peace, yet it must be achieved not at the cost of citizens' lives or the right of Ukraine to its own choice.

Speaking during the General Debate of the 74th session of the UN General Assembly in New York (USA), the head of state stressed that the war in Donbas had already lasted five years and five years had passed since Russia annexed the Ukrainian peninsula of Crimea. But despite the existence of international law and hundreds of organizations designed to defend it, Ukraine defends its own sovereignty and territorial integrity with weapons in its hands and losing its citizens.

“More than 13,000 people killed, 30,000 wounded. One and a half million people were forced to leave their homes. Every year, these monstrous numbers are heard here, but with one correction - every year these numbers get bigger. The end of the war, the return of all the occupied Ukrainian territories and the prevailing of peace are my tasks. But not at the cost of our citizens' lives, not at the cost of freedom or the right of Ukraine to its own choice,” Volodymyr Zelenskyy stressed.

That is why, he said, Ukraine needs world support. “I understand: everyone present here has their own state concern and other people's problems should not worry you more than your own - this is life. I understand. But in today's world, where we live, there is no longer someone else’s war. None of you can feel safe when there is a war in Ukraine, when there is a war in Europe,” the president said.

He urged not to forget the dreadful lessons of history, including the two world wars, when tens of millions of human lives became the price of inattention, silence, inaction or unwillingness to sacrifice one's ambitions.

The Head of State also noted that Ukraine had always demonstrated its willingness to provide peace through democracy and had taken steps towards international security, such as giving up its nuclear potential.

"Because it seemed to us that we were all building a different, new world. Where you do not need to have a nuclear weapon to be heard. Where you will be respected for deeds, not for nuclear warheads. After all, in this "new" world, our country has lost part of its territories and is losing its citizens almost daily," Zelenskyy said.

The president of Ukraine also told the audience about Wassyl Slipak, a Ukrainian who was a soloist of the Paris National Opera and was killed in Donbas, protecting Ukraine from the Russian aggression.

"This man had a divine voice. He was called one of the best baritones and countertenors in the world. His voice was heard at Carnegie Hall in New York, Notre Dame Cathedral, Covent Garden in London and Grand Opera in Paris. Each of you could have personally heard his incredible singing. But unfortunately, there is one thing that will not allow you to do so. I’ll show you (President demonstrates a bullet to the audience - ed.): 12.7 millimeters that not only stopped his career, but also stopped his life. By the way, it costs $10. And, unfortunately, today on our planet it is the value of human life," Zelenskyy said, adding that "there are thousands of such stories, millions of such bullets".